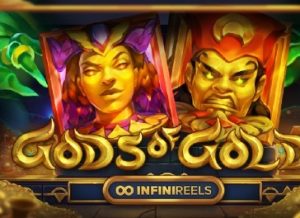 WHERE TO PLAY Gods of Gold INFINIREELS SLOT

Head to the ancient kingdom of Mesopotamia and join a Pharaoh trying to uncover plenty of treasure in the Gods of Gold INFINIREELS slot. Created by NetEnt, it’s played using the developer’s INFINIREELS game engine where successive wins increase the number of reels and the number of ways to create a winner. Look out too for random re-spins, multi-slams that add multiple reels as well as a free spins round where you’re guaranteed to land a winner on each of them. Find out what else this volatile slot has to offer in our Gods of Gold INFINIREELS review.

The gameplay in Game of Gods INFINIREELS is unusual. That’s thanks largely to the shape-shifting game mechanic. There are plenty of other extras to get stuck into too including wilds, re-spins and a free spins bonus.

This can trigger at random when you’re out of reel expansions. It does exactly what it says on the tin and awards another spin with a guaranteed winning combination though.

This randomly adds between 2 and 3 extra reels to the end of the chain. You’re guaranteed to land a winning combination when a Multi-Slam is awarded.

The bonus round is triggered by landing 3 scatter symbols on the same spin. You’ll be awarded 10 free spins. Each extra scatter on the triggering spin adds another 5 free spins to that total.

Each Win Spin starts on the standard 3×3 reels. The gameplay then continues as normal, with the reels expanding with each successive win. A payout calculation is made following each free spin.

You’ll return to the standard 3×3 machine on each free spin. The great positive here is that you’re guaranteed to land a winner on each win spin.

Re-triggers are possible too. Land 3 or more scatters on the same spin to add 10 (or maybe more) free spins to your tally. These too offer guaranteed wins.

The Gods of Gold INFINIREELS slot begins on a 3×3 reel grid which offers 27 ways to win. Winners are formed by landing the same matching symbols on adjacent reels, starting from reel 1.

Land a winning combination and an extra reel is added to the right-hand side. If this includes a symbol that matches the original winner, the process is repeated. Each extra reel also trebles the number of ways you can create a winner.

The INFINIREEL expansions continue until no new matching symbol or wild lands. The reels then revert to their original 3×3 state. You can keep tabs of the length of the win via the Symbol Meter in the bottom right-hand corner of the reels and the Minimap below.

You can play Gods of Gold INFINIREELS from between 20p and £200 per spin. The RTP is 96.21% which is about average. As usual for a NetEnt slot, there are options to set up autoplay made. You can play between 5 and 1,000 auto spins as required. You can also set win and loss limits if you wish. Turbo mode is possible too. Just click on the lightning bolt button next to the spin button to set this up.

What does stand out here is the Gods of Gold INFINIREELS volatility. This is a high variance slot. You can expect spells where the treasury will draw a blank. Get on a winning run to increase the size of the reels and the number of ways to win and the coins can quickly build.

That’s certainly the case in the Win Spins feature courtesy of the guaranteed wins. The most you can win is just over 7,000 x your total bet. As usual for a slot from NetEnt, the design in Gods of Gold INFINIREELS is impressively done. A chamber full of gold and treasure is the setting here.

There’s a glossy, bulky feel to the symbols which are very well put together. There’s a rather brooding soundtrack playing in the background while you spin which gives the game plenty of atmosphere. Overall, the design is excellent. We’ve no complaints here.

On the reels you’ll find 4 lower value gemstone symbols alongside a bird’s head, a Minotaur head, a princess and the rather fearsome looking Pharaoh. He is the most rewarding symbol. Land 3 of these in combination and you’ll win a payout of 1.25 x your total bet. If you manage to stretch that to a 10-symbol win the prize races up to 160 x your total bet.

The gold gemstone with the pink embossed gemstone is the wild. This substitutes for everything apart from the scatter symbol and can appear from reel 4 onwards.

Gods of Gold INFINIREELS uses the standard NetEnt game interface which is simple to use. The paytable is nice and clear, giving payouts as they relate to bet size rather than coins. It’s as high spec as we expected.

The expanding reels are well suited to playing in landscape mode on a mobile device. The clear and crisp design works perfectly well on a small-screen device too. No grumbles here.

We were impressed with what Gods of Gold INFINIREELS has to offer. The sound and visuals are up to NetEnt’s usual high standards and the INFINIREELS mechanic offer something different as far as gameplay is concerned.

The super high variance won’t be for everyone. If you fancy playing a slot that combines classy design, unusual gameplay and extreme volatility, then you’ll find all 3 in Gods of Gold INFINIREELS. If you want true high variance, Dead or Alive II by NetEnt is the game to play. It does also offer 111,111 x bet payouts in 1 of the free spins features.

❓ What is the Gods of Gold INFINIREELS RTP?

🥇 What is the Gods of Gold INFINIREELS volatility?

This is an extremely volatile slot. The variance here is very high. Expect smaller-sized wins (5-20 x bet) frequently with the occasion big winner if you expand the reels to 6+ reels. The maximum win is over 7,000 x bet per spin. This is more likely to occur in the Win Spins feature.

Each time you land a winning combination, an extra reel is added. If a new matching symbol lands there, the process is repeated. These expansions continue until no new winner is formed. The number of reels you can play with is infinite which could result in huge wins.

⚡ What are the Gods of Gold INFINIREELS bonus features?

As well as the INFINIREELS mechanic, there are random re-spins, random added reels (Multi-Slams) and a free spins round where you’re guaranteed to land a winner each time. It’s all about forming consecutive wins to get as many reels as possible in order to land the bigger payouts.