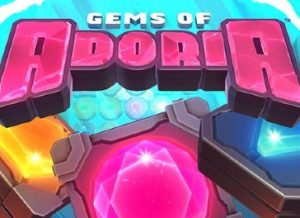 WHERE TO PLAY Gems of Adoria Slot Review SLOT

Immersive 3D design and an array of explosive features combine in the Gems of Adoria slot. This take on the classic jewel theme game from NetEnt is a little different. Look out for Striking Wilds that can randomly turn between 2 and 9 positions into jokers. Flipping Symbols can turn winning lines into even bigger successful combinations. There’s also a Free Spins feature where up to 50 free spins are up for grabs. Find out whether these jewels sparkle in our in-depth Gems of Adoria review.

The jewel theme might be very common but the features on offer in Gems of Adoria offer something a little different. They include wild extras, flipping symbols and a classic free spins feature. Let’s have a closer look.

On any spin, you could see lightning strikes hit the reels. These herald the arrival of the Striking Wilds feature. Between 2 and 9 symbols positions are transformed into wilds. A new payout calculation then follows with the new wilds in position.

Like the Striking Wilds, the Flipping Symbols feature can strike at random on any spin. A row or column of between 2 and 5 symbols can flip over and in the process, move the symbols into a new and improved position. A payout consideration follows with the symbols in their newly enhanced places.

The Flipping Symbols feature can combine with the Striking Wilds to create some cracking wild combinations with results to match.

The shimmering white orb symbol is the game’s scatter. This is the key to unlocking the Free Spins feature:

The Lightning Strike wilds are in play during the free spins. As are the Flipping Symbols. These combined can make the feature well worth landing.

The action here plays out in what looks like a standard 5 reel, 3 row, 15 payline machine. The Flipping Symbols mean that the game engine is anything but normal.

Gems of Adoria is available to play at all bankroll levels. The minimum stake is 10p per spin. This rises to a maximum of £200 for the high rollers. There are of course, plenty of levels in between. Autoplay is available as usual for a NetEnt slot. You can also set win and loss limits as required.

The RTP is a reasonable 96.13%. We’ve seen higher numbers but it’s a decent enough rate of return. The variance is low to medium with maximum payouts of 500 x bet per spin or free spin.

The NetEnt game engine is easy to navigate. You can alter bet sizes, set autoplay, consult the paytable or check out the game info quickly and easily. It’s all nice and straightforward. One area where the Gems of Adoria slot really does excel is the design. There’s an immersive quality to the 3D imagery which really gets you to the heart of the action. The reels seemingly float in the air, as do the symbols. There are plenty of moving parts on display courtesy of the Flipping Symbols too. The animations are silky smooth though and it all comes together very nicely.

The reels are set within stone walls. There you’ll find blue, green, yellow and pink gemstones – 4 small and 4 large in each colour. They’re simple certainly but very bright and easy to see.

The most rewarding standard symbols is the large pink stone. Land 3, 4 or 5 of the large pink stone in one of the game’s 15 paylines and you’ll receive a payout of 2.5, 5 or 25 times your total bet. The gold W symbol is the wild symbol. This substitutes for everything apart from the free spins scatter symbol.

Like most NetEnt releases, Gems of Adoria is available on tablet and mobile devices. The bright colourful visuals are well suited to mobile play. There are plenty of shifting pieces but it stands up pretty well on a smaller screen.

There are countless jewel-themed slots already available to online casino players. Does the world need another? Gems of Adoria does offer something novel both in terms of its futuristic design and the unusual features it offers.

The Striking Wilds feature is common enough, the Flipping Symbols feature is a new concept. They can combine to excellent effect and put wilds into optimal positions with results to match. The potentially large number of free spins available in the bonus round is also a big plus. However, the max win of 500 x bet won’t be that appealing to hardcore slots players.

We were quite charmed by Gems of Adoria. It looks and sounds terrific and the unusual features deliver some potentially exciting gameplay. Will it prove as popular as Starburst? We don’t think so.

Yes – Gems of Adoria is the first slot game by NetEnt to use real-time 3D graphics. With cutting edge visuals, a unique soundtrack and exciting gameplay, it surely is the first of many 3D slots to come from Net Entertainment.

🥇 What is the Gems of Adoria RTP?

The Gems of Adoria return to player rate is 96.13%. We’ve seen better from NetEnt but it’s still within their usual boundaries. On average, every £100 wagered returns £96.13 to the prize pool. Being a low to medium variance slot, your bankroll should last a long time.

🎰 What are Flipping Symbols?

On any spin, between 3 and 5 symbols can flip over. This can upgrade and move symbols into new positions on the reels. This in turn can create new improved winning combinations and enhanced payouts. It looks particular good with the 3D visuals as you see the symbols flip into the air with the camera angle adapting.

⚡ Is there a Gems of Adoria mobile slot?

Yes, NetEnt has created specially optimised versions of Gems of Adoria for mobile and tablet devices. You’ll find the same combination of high spec 3D imagery and potentially exciting features that are on offer in the standard desktop version of the game.