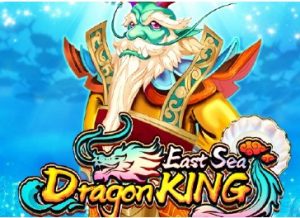 Underwater adventure with an Asian flavour is what’s on offer in the East Sea Dragon King slot. Created by NetEnt, it’s a 5 reel, cluster pays slot where winning combinations are formed by landing groups of 5 or matching symbols. Central to the action are special wild symbols. As well as replacing all the standard symbols, they expand to fill the whole reel when they hit. They also trigger a re-spin with the stacked wild locking in position. Does the simple gameplay offer enough? Find out in our in-depth East Sea Dragon King review.

There’s a simple quality to East Sea Dragon King which certainly isn’t overloaded with features. There are a few extras to consider though including expanding wilds and re-spins.

The green-faced East Sea Dragon King symbol is the wild. Whenever one of these symbols land, it expands to turn the whole of that reel wild. A payout calculation is made as usual. This is known as the Expanding Wilds feature.

A re-spin then follows, with the stacked wild locking in position. If you land a new wild symbol on the re-spin, it too expands to fill the whole reel and the process is repeated. You’ll then get a re-spin with 2 stacked wilds.

In theory, it’s possible to fill all 5 reels with stacked wild symbols. In that happy circumstance you can look forward to a bumper payout of some 1,000 times your total bet.

Instead of landing matching symbols in paylines or on adjacent reels, winners in the East Sea Dragon King slot are formed by landing the same symbol in clusters of 5 or more. These clusters can be formed both horizontally and vertically. The more symbols in the cluster, the bigger the payout.  If you land a cluster of 6 or more wilds they only substitutes for symbols on either side of the cluster.

There are plenty of options when it comes to autoplay. Click on the button next to the spin button to set between 10 and 1,000 autospins. Then head to the Advanced Settings tab and you’ll be able to set win and loss limits as required. Click on the spanner button in the bottom left-hand corner of the screen to open up the setting. Here you can activate quick spin mode as well as enabling spins via the spacebar.

The RTP (Return to Player) rate of East Sea Dragon King is 96.23%. That puts it in the medium range, neither too stingy, nor overly generous. It’s about par for a slot from NetEnt.

These seas can be pretty choppy when it comes to variance. The waters here are volatile. You can expect spells when you bankroll will seemingly drop like a stone to the ocean floor. Get on a run with the expanding wilds though and you could end up with a tidal wave of coins.

It’s possible to land some very large rewards if you fill the whole of the reels with wilds or the most rewarding jade dragon symbol, or a combination of both. The max win per spin is 1,000 x your bet. If you factor in the re-spins, the max win is 6,000 x your bet.

One area in which East Sea Dragon King really does excel is in its design. The sound and visuals here are excellent. Lush blue waters form the backdrop to the symbols. There are 7 of these. In order of value are the bronze, silver and gold coins which each pay up to 100 x your bet.

Next come the pearl shell and scroll which pay up to 250 x bet followed by the box of gold which awards up to 500 x your bet. As we’ve already mentioned, the green dragon is the top standard symbol, paying between 3 and 1,000 x bet per cluster.

The symbols are nicely drawn as we’ve come to expect from a NetEnt game. There’s an unusual, but rather appealing instrumental backing track playing the background which certainly enhances the atmosphere. No complaints about the design.

The crisp visuals and simple gameplay are an ideal combination for a mobile slot. East Sea Dragon King works very well indeed if you’re using a tablet or mobile.

It might not offer much in the way of variety but the East Sea Dragon King slot doesn’t lack for potential action. The stacked wilds with re-spins are a potentially explosive combination. This is an incredibly volatile slot so these waters should be approached with care.

If you like high variance action, then an audience with the East Sea Dragon King is recommended. If you dare! Want more water adventures? The Vikings Unleashed Megaways slot by Blueprint Gaming is worth trying as it offers 50,000 x bet wins per spin.

❓ What is the maximum East Sea Dragon King payout?

It’s possible to win up to 6,000x your total bet. That would involve hitting the top winning combination of 5 stacked wilds, then benefiting from a re-spin with all the expanding wilds locked in position.

🥇 What is the East Sea Dragon King slot RTP?

The East Sea Dragon King return to player rate is 96.23%. It’s not the biggest number you’ll see but definitely not the worst either. It’s about average for a slot from the NetEnt catalogue. Wins are fairly frequent too despite being a high variance slot.

🎰 What are the East Sea Dragon King bonus features?

East Sea Dragon King isn’t drowning in extras. The main feature comes via the wild which expands to fill the whole reel when it hits. A re-spin then follows with the expanded wild locked in position. Land more wilds on subsequent re-spins to repeat the process.

These ocean waters can really cook up a storm. The East Sea Dragon King slot volatility is very high. If you like high variance action, then this is one underwater adventure that’s certainly worth considering. The max win of 6,000 x bet compensates for the high variance.