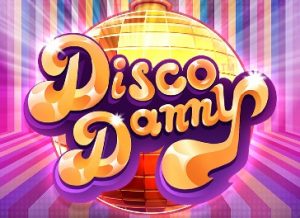 WHERE TO PLAY Disco Danny SLOT

Dig out your flares and strut your funky stuff on the virtual dance floor in the Disco Danny slot. This retro-themed game comes from NetEnt and is played on a simple 3×3 reel grid which offers 5 paylines. The golden glitter ball symbol is central to the action here. Land it in the base game for payouts of between 10 and 20 x your bet. Trigger the Free Spins feature and you’ll get free spins where the reels are filled with blanks and glitter ball scatter. Advance through the levels to bring multipliers of up to 10x into play. Find out more about this high variance game in our detailed Disco Danny review.

The Disco Danny slot is played with 3 reels, 3 rows and 5 fixed paylines. To get a winning combination, simply line up 3 symbols anywhere on the 3 reels.

You can play Disco Danny at pretty much all bankrolls. Bet levels start at 10p per spin, rising to a maximum of £250 per spin for the high rollers. Autoplay is available if required. You can set between 10 and 1,000 spins. There’s an advanced setting option which allows you to end autoplay after you’ve won or lost specified amounts. There’s also a quick spin mode.

The Disco Danny RTP is 96.04% which is about average. There might be a rather light-hearted feel to the design and gameplay here but the Disco Danny volatility is deadly serious. The variance is high as tempo from the disco soundtrack. This is a very volatile slot so take care.

However, the most you can win from a single win is 4,500 x your total bet. This will come in the Free Spins feature with the multiplier potentially rising to 10x. There’s a slightly cheesy, 1970s-style to the design in the Disco Danny online slot. You’ll hear an up-tempo disco soundtrack while you spin which is a bouncy fit.

Set against a pastel pink and purple backdrop, the 3×3 reel grid is made up of single, double and treble bars as well as a lucky 7. More rewarding are the roller boots and 2 Disco Danny symbols.

Top of the bill as far as payouts go is the Disco King symbol which delivers a chunky payout of 100 x bet if you land 3 on a payline. Disco Danny looks more like Austin Powers than John Travolta truth be told but you get the picture. Rather unusually, there’s no wild symbol in Disco Danny.

There’s nothing very sophisticated or subtle about the design in Disco Danny. It’s bright and bold though which is just what you’d expect from a slot with this theme. As usual for a NetEnt release, there’s a Disco Danny mobile slot as well as desktop and tablet versions. The simple, colourful design and the straightforward gameplay on a 3×3 grid mean it’s very easy to play on a small screen, mobile device.

The game engine in Disco Danny is rather simple and the bonus features are simple too. Golden scatters award multiplier prizes. The free spins round is the top of the pops bonus though. During the free spins, only golden scatters are on the reels. Progress through multiplier levels for increasing multipliers.

The golden glitterball is the game’s scatter symbol. Whenever one of these appears, you can look forward to a random multiplier prize which is equal to somewhere between 10 and 20 x your bet. The action really revs up during the Free Spins feature. There are 2 ways to trigger it:

You’ll then receive 3 free spins. Not exactly an outlandish allocation of free spins we hear you say. True. But there are a couple of things worth noting that can make the free spins well worth landing.

If you fill all 9 positions with golden scatters and you’ll advance to the next level. All your wins from the new level come with a multiplier attached. There are 5 levels to work through with the following multipliers awarded:

The theme here might be a little on the cheesy side but there’s some decent gameplay on offer in the Disco Danny slot courtesy of the free spins round. Get through the levels and the multipliers can really work their magic.

Be warned though. For all its shiny looks, Disco Danny is an extremely volatile slot. You could see your bankroll dance away in the virtual blink of an eye. Just hope you collect enough golden scatters to make it to levels 4 and 5 where the bigger wins will come from.

Overall, we liked this virtual trip back to the 1970s. It’s brash and flashy but the golden glitter ball can deliver some top action. If you want to get your dancing shoes on, Playtech’s Grease slot (which is the official game for the iconic movie) is recommended.

What is the Disco Danny RTP?

The Disco Danny return to player rate is 96.04%. That puts in in the middle of the pack as far as player return rates go. However, there’s a chunky maximum win of 4,500 x your total bet though from each free spin.

Yes, see past the 1970s imagery and you’ll find a high variance slot. Wins can be rare but there are some big potential rewards on offer, especially from the multipliers in the Free Spins feature.

What are the Disco Danny bonus features?

In Disco Danny, there’s a Free Spins feature. You’ll get 3 free spins to start with on reels made up of blanks and golden glitterball scatters which each award a cash prize. Fill the screen with scatters to level up and get an increasing multiplier which can reach 10x. There’s also a Golden Multiplier feature which gives you cash bonuses. Find out more in the Bonus features section.

Where can I play Disco Danny?

NetEnt is the software provider that has created Disco Danny. You can strut your funky stuff at most online casinos. This means most casino sites will have Disco Danny and all other NetEnt slots.