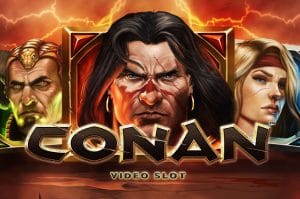 WHERE TO PLAY Conan SLOT

Based on the muscular sword and sorcery rather than the US late night talk show host, Conan is a 6 reel, 20 payline video slot from NetEnt. You can expect high end design here as well as plenty of extras. Look out for transforming symbols, expanding wilds, mystery multipliers as well as 3 different free spins which vary in volatility. Play on all devices from between 20p and £200 per spin.

There aren’t many better developers that NetEnt when it comes to design and Conan lives up to their usual high standards. On the reels you’ll see lower value coins as well as ropes, swords, helmets and a cast of characters from the story.

Conan is the best payer, awarding 6 times your total bet if you land 6 on a payline. There are also 2 different wilds, more of which shortly. There’s an epic theme to Conan and that’s matched by the extensive range of features.

There are also 3 free spin features which are triggered by landing 3 or more scatters on the same spin – with 10, 15, 25 or 50 free spins for 3, 4, 5 or 6 scatters, the Linked Reels feature applies on each free spin but can see between 2 and 6 linked reels. Anyway, you then choose from 3 options:

There’s a lot more going on here than we’ve come to expect from a NetEnt video slot. It works pretty well though, offering plenty of variety and keeping things fresh. The high spec design is a given and it doesn’t disappoint here. The visuals are superbly drawn and the soundtrack has a suitably epic feel.

I loved Arnie’s Conan movies growing up – however, the video slot version looks great and offers payouts of 2,016 times your bet on each free spin with the 7x multiplier. On a base game spin or other free spins, you can only win 288 times your bet – this is seriously disappointing. You really need the 7x multiplier from the Mystery Multiplier feature t works its magic.

NetEnt could have done more

Honestly, I think NetEnt has got Conan wrong – the brand is well-known and it provides for some excellent source material. However, the max win amount (2,106 x bet) is decent but you’re depending on 1 feature to potentially deliver this. I would much rather play other branded titles like NetEnt’s Vikings (10,000 times bet max win) or Microgaming’s Game of Thrones (20,250 times bet max win).