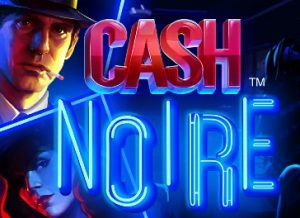 WHERE TO PLAY Cash Noire SLOT

Play private detective and try and solve a mysterious murder case in a sleazy city in the Cash Noire slot. Created by NetEnt, the action takes place on a 5×4 reel grid that offers 1,024 ways to win. There are some tasty extras in this crime-themed slot including cascading reels and mystery transforming symbols. Collect all the items from the Clue List and you’ll trigger the Free Spins feature. On offer here are free spins as well as opportunities to bring multipliers of up to 10x into play. Does crime pay? Find out in our detailed Cash Noire review.

The Cash Noire slot has 5 reels, 4 rows and 1,024 ways to win. Winning combinations are formed by landing 3 or more matching symbols on adjacent reels, starting from reel 1. The 5 reel, 4 row setup offers 1,024 ways to create a winner.

Bet levels start at 20p per spin, rising to a maximum of £20 per spin. NetEnt’s standard autoplay options are available in Cash Noire.

The RTP in Cash Noire is 96.06%. This isn’t a very volatile slot. The volatility is low in fact. If you’re a casual player looking to eke out a limited bankroll, it’s a good choice as it offers plenty of play for your investment.

There are still chances to land some decent rewards too, especially in the Free Spins feature if the multipliers do their stuff. The maximum payout is 1,033 x your total bet with the potential 10x on offer.

The gameplay in Cash Noire is quite unusual and takes a little getting used to. This certainly isn’t a classic fruit machine. If you like plenty of variety you’ve come to the right place though. Let’s take a closer look at what features you’ll find here.

When you get a winning combination, the contributing symbols will disappear from the reels. New symbols than come in to take up the empty spaces. If you get another win, the process repeats itself until no more new wins are formed. The Avalanche feature allows for continuous wins. It has been used on numerous slots by NetEnt including Gonzo’s Quest and the mystical Asgardian Stones slot.

You can still benefit even if you endure a winless spin courtesy of the mystery symbol. If this lands outside the Crime Zone (see below), the mystery symbol transforms into a random symbol and give you a second bite of the payout cherry. If this symbol then hits in the crime zone, it reveals a random symbol. It then clones itself throughout all the spots of the Crime Zone pattern.

On each spin, you’ll see an area of the reels that is edged in red. This shifts around the reels, forming new shapes each time. If you land a winning combination that includes symbols inside the Crime Zone, they unlock a clue on the Clue List to the left of the reels.

The Crime Zone expands from its standard 3-symbol size to 4 symbols when between 3 and 6 clues are activated. With 7 or more clues activated, the Crime Zone stretches to 5 symbol positions.

There are 13 clues to activate in total. When you manage that, you’ll trigger the Free Spins feature. You’ll start with 6 free spins. It’s here that the chase begins which can in turn bring extra goodies into play which can boost your winning chances. For starters, the Crime Zone covers 5 positions on each free spin.

To the left of the reels you’ll see a map. Each time your car passes a 7th location, it increases the multiplier by 1x. When a car reaches a 13th location, 2 extra free spins are added to your total. Multipliers can reach up to 10x during this round. There’s a 1930s, film noir feel to the design in Cash Noire. Picture classic private detectives like Philip Marlowe. A grimy office is the setting for the base game. On the reels you’ll see magnifying glasses, matchbooks, playing cards, glasses of whisky, daggers, detectives, mobsters and their molls. It’s all rather smoky and very atmospheric.

In the Free Spins feature, you’ll take to the mean city streets. In both environments, the visuals work very well, accompanied by blaring police sirens and a somewhat sleazy backing track. It all comes together very nicely which is what we’ve come to expect from a NetEnt release.

The dark setting and imagery work well enough on a mobile. It’s not a slot we’d recommend playing outdoors on a bright, sunshine-filled day though. The design isn’t really suited to that. Then again, it’s not exactly a slot that screams summer holiday fun. It’s all very playable on the small screen though.

The Crime Zone element and the clue collecting make Cash Noire rather unusual. We’d recommend you give it a spin in demo mode first if you can, just to get used to the gameplay. Once you have, it’s a perfectly solid and very atmospheric slot. The rather low volatility won’t be for everyone but it’s ideal for casual players.

We rather liked Cash Noire. In this particular slot, crime does pay. If it’s low variance action you’re after, the Starburst slot is the ideal choice and NetEnt’s most popular title.

❓ What is the Cash Noire RTP?

The Cash Noire return to player rate is 96.06%. That puts it in the medium or average range. On average, it pays just over £96 for every £100 wagered. This can vary widely over the short term of course. It’s low variance meaning your bankroll should last a long time.

🥇 What is the Cash Noire maximum payout?

For all its low variance, Cash Noire can still deliver some pretty fiery action. Trigger the Free Spins feature and the multipliers of up to 10x can get your map journey motoring. The maximum win is 1,033 x your total bet per free spin.

🎰 How does the Avalanche feature?

When you form a winning combination, the winning symbols are removed from the reels. New symbols then drop in to occupy the vacated spaces. This give you another chance to win. The avalanches continue as long as a new win is created. It is also referred to as cascading reels/symbols.

⚡ Can you play Cash Noire on a mobile device?

Yes, NetEnt has created a very playable Cash Noire mobile slot. The 1930s-style imagery hark back to the golden age of the private detective movie and work very well on mobile and desktop devices alike. No complaints about the design here.