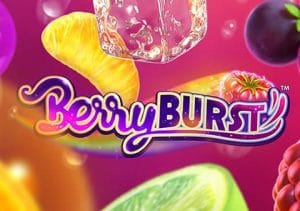 WHERE TO PLAY Berryburst SLOT

It’s been a long time in the making but Berryburst, the much-anticipated sequel to the hugely popular Starburst video slot, has hit the online casino shelves. Created by NetEnt, Berryburst is a simple 5 reel, cluster pays game. The highlights here are expanding wilds and re-spins. Stakes range from between 10p and £200 per spin.

Everything about Berryburst is simple. The bright and glossy visuals are backed by a bouncy pop soundtrack. On the pastel-shaded reels you’ll see heart, diamond and spade symbols as well as higher paying fruit. These fruity symbols include lines, grapes, tangerine segments and raspberries.

Helping to create those winning clusters is the wild which can appear on all 5 reels. It replaces all other symbols. Every time a wild hits, it expands to fill the whole of the reel. After the payout has been made, the Re-Spin feature is triggered with a re-spin is awarded – the expanded wild locks in place.

If you land another wild on another reel on that re-spin, you’ll get another re-spin, this time with the 2 stacked wilds in play. The re-spins continue as long as a new wild hits. This can lead to 5 fully wild reels in total – if you manage this, you’ll win 500 times your bet.

That’s pretty much it as far as gameplay goes. You won’t find any free spins or traditional bonus features in Berryburst. This is a very simple game. The only extras on offer are the re-spins and expanding wilds. You can expect to see these at regular intervals though.

The sound and visuals are just what you’d expect from a NetEnt video slot. The gameplay owes more than a hint to the original Starburst game. Take a single feature and keep on bashing it.  That simple formula provided a huge hit with Starburst. More of the same is on offer in Berryburst.

If you liked the original, then this colourful sequel should hold plenty of appeal – the fact you can get 5 re-spins as opposed to Starburst’s 3 increases the win potential to 1,868 times your bet every time you trigger the Re-Spin feature.