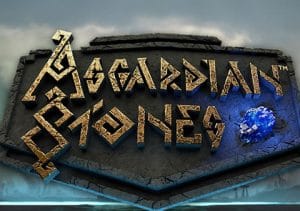 WHERE TO PLAY Asgardian Stones SLOT

Join Odin and his band of Norse Gods in Asgardian Stones. Created by NetEnt, it’s a 5 reel, 20 payline video slot that’s played using an Avalanche Reels game engine. Look out for Colossal Symbols that can deliver multipliers of up to 4x as well as a bonus wheel that awards up to 25 free spins and cash prizes. Play on your desktop, tablet or mobile from between 20p and £200 per spin.

If you’re not up to speed on your Scandi history (and we certainly weren’t), Asgard was the setting for the ancient realm of Valhalla, the heavenly home to Norse warriors who died in battle. There’s a suitably epic feel to the design here.

Guarded by the giant stones of Asgard, the reels are made up of lower value A, K and Q symbols alongside 5 gods. These look as if they have been carved in stone and are impressively done. The most rewarding is the orange-tinged Odin, who will get you 40, 100 or 500 coins for a 3, 4 or 5-symbol combination. The W is the game’s wild. It substitutes for everything apart from the Bonus Wheel.

Rather than spinning, symbol blocks drop into place – the action takes place using Avalanche Reels so after every winning spin the successful symbols are blasted away and new ones drop in their place. As long as a new winner is created, the avalanches keep on coming.

The epic feel is maintained with the colossal 2×2 and 3×3 symbols blocks which can land on any spin. Even if only part of a Colossal Symbol forms part of a winner, the whole block is blasted away during the avalanche.

These Colossal Symbols can trigger the Colossal Crush feature which sees full blocks fall and crush the row below. The Crushes continue until the block reaches the bottom or comes up against a row that doesn’t have any empty positions. Each crush awards a multiplier which can reach up to 4x.

Rather than a scatter, the 3×3 Bonus Wheel block triggers the Bonus Wheel feature here. It lands on the 3 right most reels only and can award cash prizes of up to 36 times your total stake or 5, 10 or 15 free spins. Just like the base game, the Avalanche Reels are in play during the free spins.

The other added extra is the wild which can appear as a colossal 2×2 or 3×3 block. If the wild makes up part of a winner, it disappears as normal. If not, it stays in position until it does form part of a winning combination. You can re-trigger the Bonus Wheel up to 3 times from each activation giving you up to 25 free spins in the Free Spins feature.

As you’d hope from a video slot about a Scandinavian saga, Asgardian Stones has a suitably epic feel. The design is as high end as you’d hope and there’s a nice variety of features. The Avalanche Reels keep the action ticking over and the bonus wheel and Colossal Crush offer some solid opportunities.

The Norse genre is becoming increasingly popular. Asgardian Stones is one of the better ones and worth seeking out if you enjoy the myth and legend theme. Alternatively, Yggdrasil Gaming’s Vikings Go Berzerk is recommended.