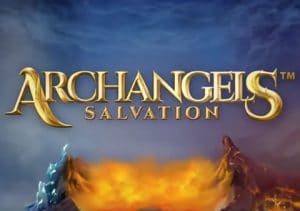 WHERE TO PLAY Archangels: Salvation SLOT

Angels take on demons in a battle between heaven and hell in Archangels: Salvation. Created by NetEnt, it’s a 6 reel, 12 row, 100 payline video slot that comes with a bonus round that awards up to 25 free spins. Land wilds in the 2 special Hot Spot zones with can add multiple extra wilds into play. Stakes on all devices range from between 40p and £200 per spin.

There’s an apocalyptic feel to the design in Archangels: Salvation. The left-hand side of the screen is dominated by a heavenly female angel wielding a magical spear. On the right, there’s a hellish demon and his mighty sword. Jammed in between you’ll find the reel set and an unusual one it is too. The action takes place on a 6 reel, 12 row machine which combine to deliver 100 paylines.

On those reels, you’ll see playing cards suit symbols and a collection of motifs and armour. The best paying symbols are the angel and demon. Both of these can land in a stacked formation and fill up to 12 rows. Land 6 of them and you’ll pocket 150 coins. There’s also a wild that can spin in 2×2 blocks or singly and replaces all other symbols bar the scatter. The wilds are central to much of the feature action on offer in Archangels: Salvation.

In the base game, the 2 reels at the top and bottom of the reels are Hot Spot zones. Land a wild in 1 of these zones and some wild extras are on offer. Land a wild in the top 2 reels to trigger the Heaven feature – 2 or 4 stacks of 4-high wilds are added to the reels and a new payout is made.

Land a wild in the bottom 2 reels and you’ll get the Hell feature – here either 8 or 16 single wilds are brought into play and a new payout follows.

Land 3 or more scatters on the same spin and you’ll trigger the Free Spins feature where you’ll receive 10, 15, 20 or 25 free spins depending on how many scatters triggered the feature. The Hot Spot zones are expanded to 3 rather than 2 rows during the free spins making it easier to benefit from the Heaven and Hell features.

NetEnt’s first 100 payline game is an enjoyable one. The slightly unusual set up takes a little getting used to. The visuals are as neat and crisp as you’d expect from this developer and there’s a suitably sweeping orchestral score playing as you spin.

The features are a little unusual too. We found the base game action a little slow but the game has the potential to spark into life whenever you land a wild in a Hot Zone to trigger the Heaven and Hell features. That’s especially the case in the Free Spins feature where you can expect to land the extra wilds more regularly.

NetEnt has created something quite fresh here. The sound and visuals are as impressive as you’d expect. Throw in the innovative extras and Archangels: Salvation becomes a very playable prospect.