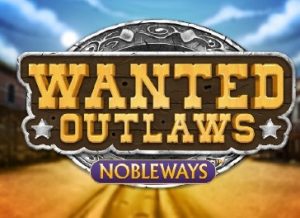 WHERE TO PLAY Wanted Outlaws SLOT

Join the sheriff of a frontier town bring a group of bandits to justice and scoop some prizes as you do so in the Wanted Outlaws slot. This Wild West adventure comes from All41Studios and Microgaming and is played using the Nobleways game engine where the 5×5 reel grid offers 3,125 ways to create a winner. Feature highlights include a Free Spins feature where a wild symbol is added. Each time one of these appears, it scoops up the prizes on offer from the wanted posters which can reach up to 200 x your bet apiece. See what else this volatile slot has to offer in our detailed Wanted Outlaws review.

Wanted Outlaws Theme – saddle up for a Wild West adventure A dusty town that’s the staple of western movies is the setting for the Wanted Outlaws slot. There’s a cartoonish quality to the visuals which are solid rather than spectacular. Likewise, the country-style soundtrack. It’s not quite a toe-tapper but it’s not too intrusive either.

On the wooden reels you’ll find lower value A to 9 symbols plus an array of symbols relating to the Wild West theme. You’ll see wanted posters, horseshoe and rope, cowboy boots and the Stetson and gloves. The pair of pistols tops the bill as far as payouts go. You’ll win an award of 0.5, 3, 8 or 20 x your total bet when you land 2, 3, 4 or 5 on adjoining reels.

There’s no sheriff in the base game but this rather crazy looking man joins the action when you trigger the free spins round. The sheriff is the wild symbol.

Wanted Outlaws is available to play on all devices including tablet and mobile as well as computer. The colourful design is decent enough and the simple but explosive gameplay works well on the smaller screens.

The Wanted Outlaws slot uses the Nobleways game mechanic. This is a 5×5 grid where the number of ways to win is fixed at 3,125. Winners are formed by landing matching symbols on adjoining reels, starting from the leftmost reel.

Bet levels range from between 10p and £100 per spin catering to all players. You can set between 10 and 100 autospins as required too.

This is a very fiery slot as far as variance is concerned. The Wanted Outlaws volatility is extremely high with the wanted poster in the feature offering some serious potential. The most you can win from a single spin is 2,500 x your total bet.

The hit rate is just over 25% so on average, you’ll land a winner around every 4th spin. The Wanted Outlaws RTP is a slightly above average 96.41%.

The base game action is pretty ordinary. There’s nothing in the way of modifiers to liven things up. It’s a different story if you trigger the free spins round though. Free spins, wilds and bounty bonuses can really get things moving. Land 3, 4 or 5 sheriff’s badge scatter symbols anywhere on the reels to activate the game’s Free Spins feature. The more scatters, the more free spins you’ll play with, up to 25:

The base game doesn’t include a wild symbol. That’s remedied during the free spins. The sheriff symbol is wild, replacing all the standard symbols when it makes up part of a winning combination. The wild can land anywhere on the grid with the exception of reel 1. That sounds pretty standard. There are some tasty extras on offer once you begin the feature. The wild is also instrumental in the Wanted Poster feature which is live during the free spins. On the reels you’ll see wanted posters showing a trio of outlaws. Each wanted poster comes with a cash value attached. The value is picked randomly:

The value of the wanted posters is awarded whenever you land a wild symbol during the free spins. Each wild awards the total of all the posters on display. Let’s given an example.

During a free spin, you see a Bandana Man with a 5 x bet bounty, the Woman with a 15 x bet bounty and Bearded Bandit with a 200 x bet bounty. If there’s no wild on the grid at the same time, you won’t win anything. If there is a single wild, you’ll win the 5x plus the 15x plus the 200x for a total prize of 220 x your total bet.

Now imagine that same combination except you have 2 wilds on the grid instead of 1. The wanted poster prizes are collected by EACH wild. That means that the prize with 2 wilds would be 440 x bet. With 3 wilds it would be 660 x bet. The wanted posters can appear as single symbols or in stacks which can deliver potentially even better rewards.

Wanted Outlaws Thoughts/Opinion – all about the Wanted Poster bounties

There’s nothing very exciting about the Wanted Outlaws slot base game. Trigger the Free Spins feature though and things can get very lively indeed courtesy of the wanted posters and their associated prizes.

A good haul of free spins and plenty of wilds can deliver some spectacular action. Be warned though, Wanted Outlaws is a very volatile slot so expect plenty of spells when your sharp shooting will muster very little in the way of rewards.

The Wild West theme has fallen out of favour with film-goers. It’s still popular with slot players. If you enjoy the theme, Wanted Outlaws is one to consider. Another option is the iconic Dead or Alive 2 slot game by NetEnt which is even more volatile and has huge payouts up to 111,111 x bet from 1 of the features.

What is the Wanted Outlaws RTP?

The Wanted Outlaws RTP rate stacks up pretty well at 96.41% which is slightly better than average. The overall hit rate is around 25%. On average, you can expect to land a winner around a quarter of the time.

What is the Wanted Outlaws max win?

The Wanted Outlaws maximum win is 2,500 x your total bet. The action in can be pretty fiery though as it’s a volatile slot. The free spins round is where the big wins will come from.

Is there a Wanted Outlaws free spins feature?

Trigger the Free Spins feature and you can look forward to 10, 15 or 25 free spins. A wild symbol is added during the free spins. Each time a wild symbol lands, it collects the values of all the wanted posters on show. These can be worth 200 x bet your stake apiece. Multiple wilds, award multiple bonuses.

How does the Wanted Poster feature work?

Look out for sheriff wilds during the free spins. When wilds land, they collects the wanted poster values which can go up to 200 x bet. Known as the Wanted Poster feature, 2 or 3 wilds will double or treble the bounty values.