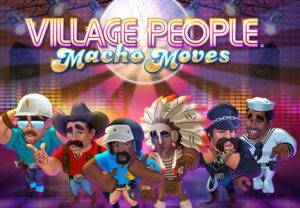 Get ready to strut your virtual funky stuff in the discotastic Village People Macho Moves. Created by Fortune Factory Studios for Microgaming, it’s a 6 reel, 15 payline video slot that comes with high spec visuals, a bouncing soundtrack and 6 different free spin rounds, each of which comes with a big modifier extra. Play this high variance game on your PC, tablet or mobile from between 20p and £25 per spin.

A video slot based on the campest band in pop history was never going to be an understated affair and the design in Village People Macho Movies is a brash and colourful as you’d expect. The setting is a disco dancefloor. There you’ll find playing card suit symbols alongside platform shoes, sunglasses, records, tapes and microphones.

There are 2 wilds. Joining the standard glitter ball wild is the VP wild. Whenever 1 of these VP wilds hit, they expand to fill the whole of the reel. This is called the VP Wild feature. Each VP wild that lands also lights up a position on that reel’s meter. Once the meter is fully illuminated, you’ll trigger the relevant feature and receive 5 free spins. These come with a special modifier. What you get depends on which reel’s meter is full:

It’s possible to fill multiple meters on the same spin. Manage that and you’ll play out each set of free spins, complete with their multiplier, in order.

Village People Macho Moves is one of the better music-themed video slots we’ve played. The design is pretty gaudy but is actually very well done. The soundtrack includes some of the Village People’s biggest hits including YMCA, In The Navy and of course, Macho Man. That won’t be to all tastes of course but there’s always the mute button.

The gameplay is rather good too. The number of free spins available isn’t massive but the wild and upgrading extras can make then well worth hitting.

The Village People might be the most obvious choice for a music-themed video slot. Microgaming has done a pretty good job here though. Well designed, volatile, offering plenty of variety and payouts of up to 6,330 times your bet, this is well worth a spin if you’re anything but a disco lover. I also recommend you try Playtech’s Grease which is based on the classic 1978 film!