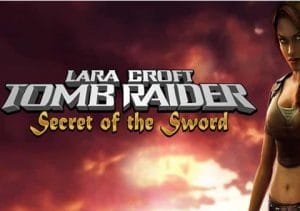 WHERE TO PLAY Tomb Raider Secret of the Sword SLOT

Tomb Raider Secret of the Sword is a video slot with 5 reels and 30 paylines that is powered by Microgaming. The game was released in 2008 with Microgaming releasing a mobile/tablet version in May 2018! The game is based on Lara Croft which is played by Angelina Jolie in the blockbuster movie.

You can play from as little as 30p a spin to as much as £60 a spin. Tomb Raider Secret of the Sword may look a little dated now but it doesn’t deter from its appeal in my opinion. With standard A, K, Q, J and 10 royal card symbols, you have 5 different Lara Croft symbols on the reels – the wild is the most rewarding giving you 250 times your bet for 5 across a payline.

In the base game, you have the Super Mode feature that awards you with 5 free spins – the feature is triggered at random though with multiple wild symbols remaining sticky for the 5 free spins. It’s very similar to the Wild Desire feature in the superb Immortal Romance.

The wild symbol is naturally Lara Croft herself and replaces any symbol (not that scatter) to form a winning combination. The scatter symbol is the Excalibur Key and if you get 3 or more anywhere on the reels, you will trigger the Free Spins with Rolling Reels feature.

You will get 10 free spins and when you get a winning combination, winning symbols explode and disappear with new symbols replacing them. As a result, the multiplier increases after 2 consecutive winning free spins up to 5x! I’ve never big a huge fan of the Rolling Reels feature but occasionally can pay out pretty nicely.

Then you have the Global Adventure Bonus feature which is triggered if you manage to line up 5 passport symbols – you are then whisked away to exotic locations such as London, Nepal, Bolivia, Ghana and Tokyo. Lara Croft will then swing across the screen looking for fragments of the secret sword (2 booby trap symbols will end the feature).

If you uncover a Hidden Treasure, you can choose either a cash prize or a 2x multiplier, or access to the Shootout Bonus feature. There are 15 disc symbols and Lara Croft shoots at them to reveal to disc with the highest value. If manage to defeat Amanda, you will get a Sword Fragment.

Tomb Raider Secret of the Sword is a low variance video slot which is very entertaining. Your bankroll will go a long way and you can win big in the features – to the tune of 1,411 times your total bet on every 5x multiplier free spin. However, expect smaller sizes wins. If you like higher variance (and something more modern), try Microgaming’s Jurassic Park which is also packed with bonus features.