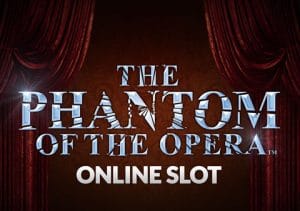 The Phantom of the Opera: Demo

WHERE TO PLAY The Phantom of the Opera SLOT

Andrew Lloyd Webber’s most famous musical, The Phantom of the Opera, gets the video slots treatment from Microgaming. It’s a 5 reel, 243 ways to win game that comes with stacked wilds, a pick me round and a pair of free spins bonuses that come with wild and multiplier extras. Stakes range from between 30p and £15 per spin.

This is an official movie tie-in game with the visuals coming from the 2004 film version of Phantom which starred Gerard Butler as the mysterious masked musician. As you’d expect, the design here is high-end. The stage of the Paris Opera House forms the backdrop to the reels which feature the phantom’s mask, a sealed letter, opera glasses, bottles of scent, a musical score and a red rose.

The higher value and wild symbols are all characters from the film. They include Andre and Firmin (Simon Callow and Ciaran Hinds), Carlotta (Minnie Driver), Raoul (Patrick Wilson), Christine (Emmy Russom) and The Phantom (Gerard Butler). Raoul, Christine and Emmy can all land 2-high. You’ll hear some of the show’s most famous songs playing in the background as you spin too.

Microgaming hasn’t sacrificed features for design here – there are some very decent extras to get stuck into here:

There are 3 more bonus features that are triggered by landing 3 or more scatters on the same spin. You’ll then have the pick of these features. Here are the details:

Music of the Night Free Spins feature – 10 free spins are awarded if you choose this round. 1 of the following modifier extras is applied on each 1 of them: 1 to 5 random wilds or 1 to 3 wild reels, a multiplier of 2x, 3x or 4x or 2 to 5 extra free spins.

All I Ask of You Free Spins feature – 10 free spins are on offer here too. Christine and Raoul wilds start on reel 1 and 5. The pair dance round the reels moving 1 space at a time on each spin. The pair can deliver some modifiers too depending on where they land.

Masquerade Bonus feature – this is a pick me round which can reach 3 levels. The further you progress, the better the prizes on offer.

The selection of bonus rounds offers plenty of variety. Throw in the 2 base game extras and there’s much to like as far as features go. The variance is in the medium range offering a balance of payouts.

We’re not massive West End musical fans here at CasinoManual.co.uk – however, this official adaptation of The Phantom of the Opera impressed us though. The sound and visuals are very nicely done and there was more in the way of gameplay on offer than we expected.

We don’t think it will be as much of a smash as the long-running show on which its based but this video slot version of Phantom has the potential to be a hit. I would also recommend you try some other branded titles from Microgaming such as Jurassic World and Tarzan.