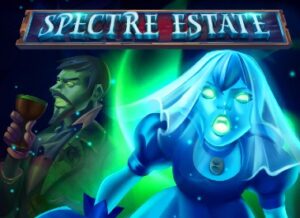 WHERE TO PLAY Spectre Estate SLOT

Braving a creepy haunted house can deliver rewards of 2,219 x bet in the Spectre Estate slot, a super volatile Halloween-themed game created by Just for the Win in combination with Microgaming.  The gameplay in this 5 reel, 40 payline title is a little unusual. Above each reel are feature windows. Land 2 feature symbols on the same spin and you’ll activate the Magical feature in the window. This can deliver instant win awards are respins with wild and multiplier extras. There’s also a Free Spins feature where the modifier extra from the base game can really get things more. Discover more in our in-depth Spectre Estate review. 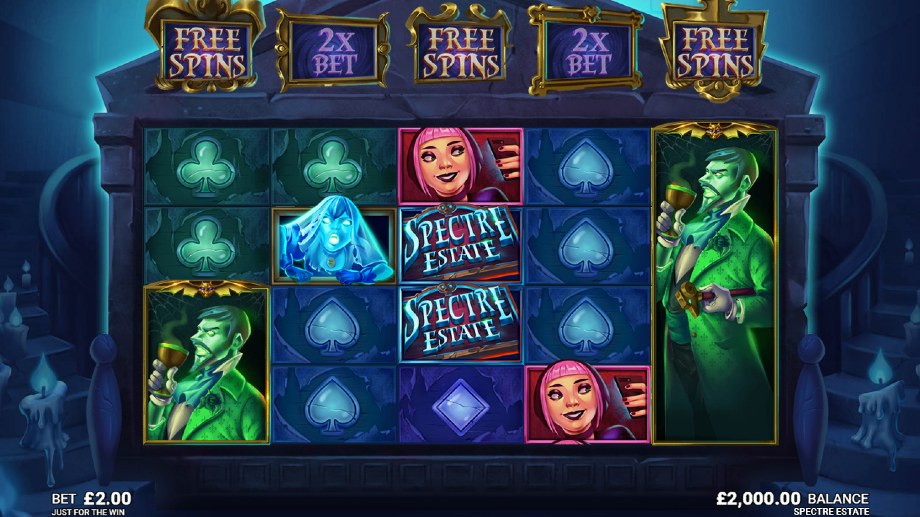 Microgaming games usually mean high class sound and visuals and the Spectre Estate slot is no exception. The design here is very nicely done. The lobby of the grand haunted house is the setting here. Flanked by a large staircase and burning candles, there’s a dark rather creepy feel to the imagery.

A creepy-themed slot needs a soundtrack to match and Spectre Estate doesn’t disappoint. It’s catchy and a nice blend of classic horror and something a bit cheekier. Think more Scooby Doo than an X rated horror movie.

The reels include lower value heart, diamond, club and spade symbols which appear alongside female and male ghost hunters. Top of the payers is the logo symbol which awards 8 x your total bet if you land a 5-on-a-line combination. That same top award is matched by the bright green wild symbols. This can land on all 5 reels and substitutes for all the standard symbols in a winning combination.

You can play Spectre Estate on all devices including PC, tablet and mobile. You’ll find the same combination of volatile gameplay and high-class sound and visuals regardless of what sort of device you’re using.

The set up in the Spectre Estate slot game is straightforward enough. The 5 reels and 4 rows combine to create 40 paylines. Landing 3 or more symbols in one of those 40 paylines, on adjacent reels, starting from reel 1, will create a winning combination.

Bet levels range from between 10p and £100 per spin. Just click on the coins button to the right of the reels and adjust accordingly. You can set up to 100 autospins if required. For quick spin mode, head to the settings tab.

The Spectre Estate RTP rate is 96.12% which puts it in the middle of the pack. This haunted adventure is a high variance one. Thee Spectre Estate volatility is high. The hit rate of just over 20% means that on average, you’ll land a winner around once every 5 spins. The max payout is 2,219 x your total bet per spin.

This haunted house doesn’t just provide some creepy chills. There are some thrills to be had too courtesy of the raft of modifiers and free spins which can strike on any spin. 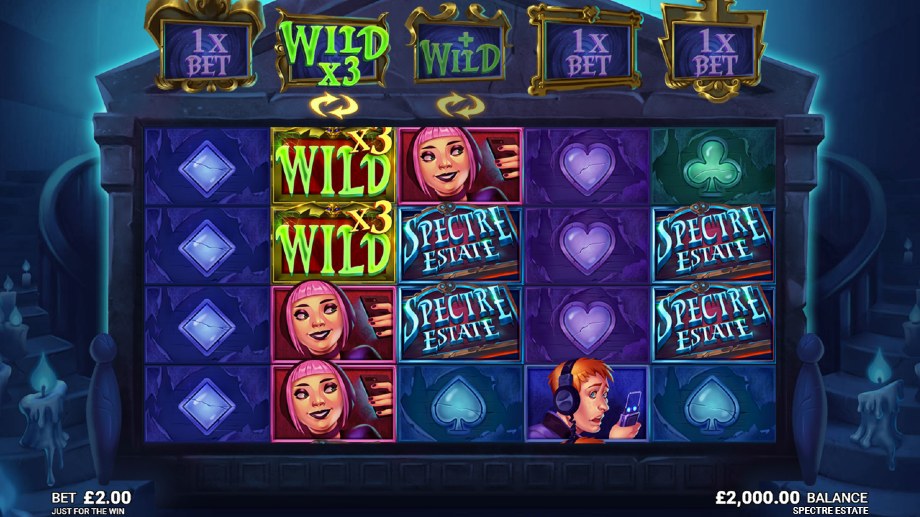 Magical features are central to much of the best action in Spectre Estate. To trigger them, you’ll need to land 2 feature symbols (the ghostly figure in blue) on the same spin. You’ll notice that there’s a window above each of the 5 reels. When the 2 feature symbols hit, you’ll win the features shown in the windows directly above them:

Multiple feature symbols mean that it’s possible to land big combinations of modifiers which can really get things moving. 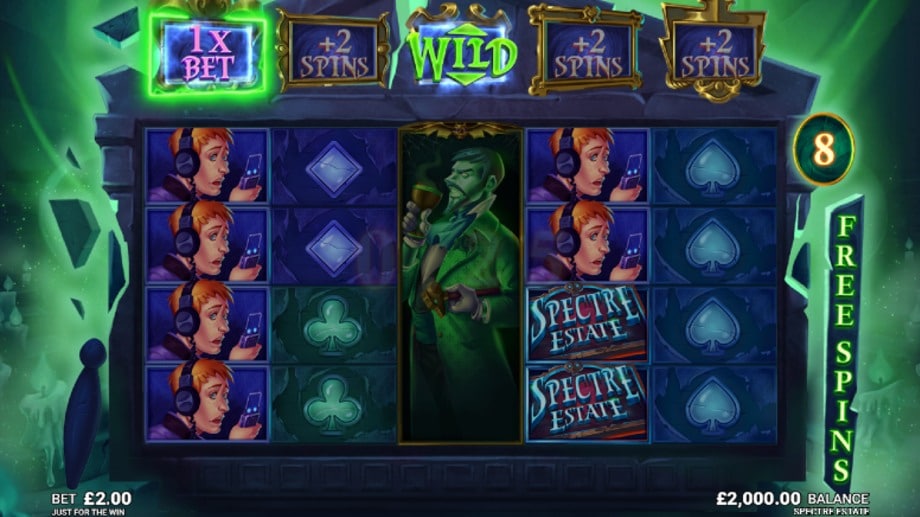 The feature windows from the triggering spin remain open throughout the round. That means that a modifier will hit on each of those 2 or more reels on each free spin. You can add more free spins to your tally during the feature too.

The range of bonus features is the highlight of this haunted house adventure. We found the Free Spins feature quite tricky to trigger but that’s not surprise given the slot’s volatile nature.

The Magical feature spice up the gameplay and come along at regular intervals. Put together, it’s a solid feature offering. If you’re looking for a slot to spice up your Halloween, a trip to the Spectre Estate should do the job just fine.

However, they are much better horror themed slots out there, namely the iconic Immortal Romance slot by Microgaming.

What is the Spectre Estate RTP?

The Spectre Estate return to player rate is 96.12% which puts it in the middle of the pack as far as player return rates go. The hit rate is just over 20% so on average you land a winner around once every 5 spins.

What is the Spectre Estate max payout?

The maximum payout is 2,219 x your total bet per spin. This haunted house can be a pretty fiery as the volatility is high. The Free Spins feature can be tricky to trigger but it can deliver some decent rewards.

Is there a Spectre Estate free spins feature?

Yes, the Free Spins feature begins with at least 8 free spins. Feature windows from the triggering spin are in play meaning you can benefit from the Magical features during the free spins.

What are the Magical features?