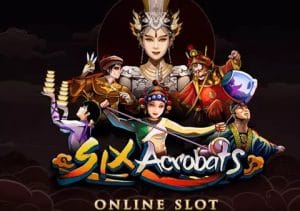 WHERE TO PLAY Six Acrobats SLOT

A travelling troupe of performers are the stars of Six Acrobats, a Chinese-themed video slot from the Microgaming stable. Available on desktop, tablet and mobile devices, this 5 reel, 9 payline game comes with a bonus round where you will benefit from a 5x multiplier as standard – wilds can boost that multiplier up to a mighty 25x! Play this highly volatile title from between 9p and £22.50 per spin.

A classical Chinese theatre stage is the setting for Six Acrobats. Flanked by ornate columns and brightly coloured lanterns, the reels include lower value A to 10 playing card values and a quintet of higher value acrobats in an assortment of uncomfortable looking poses.

They’re joined by the Six Acrobats logo which is the game’s wild – whenever this forms part of a winning combination during the base game, that payout benefits from a 5x multiplier.

The sixth acrobat (the woman in white) is the scatter – land 3, 4 or 5 scatters on the same spin and you’ll trigger the Free Spins feature where you can look forward to 15, 20 or 25 free spins. Just like the base game, multipliers play a big part in the action on offer in the feature – all winning combinations receive a 5x multiplier.

If you’re lucky enough to land a winning combo that includes a wild, the payout flies to the tune of a 25x multiplier boost. It’s not possible to re-trigger a full complement of free spins – however, every time you land a scatter during the feature, 1 extra free spins is added to your tally though.

With multipliers of 5x and 25x on offer, you won’t be surprised to hear that Six Acrobats is a very volatile video slot with wins of up to 4,333 times your total bet on every free spin! Expect lengthy flat spells interspersed with the occasional decent win.

Six Acrobats is a relatively basic game, albeit a very good looking one. The traditional visuals work very well here. There’s nothing too complex on offer as far as extras go. With just free spins and multipliers on offer, you can’t go too far wrong.

If you’re a fan of high variance action or the Chinese theme, you’ll find plenty to like here. And if the wilds do their stuff, the Six Acrobats can produce a performance to remember. If you like big multipliers, Microgaming’s Jungle Jim El Dorado has them too.