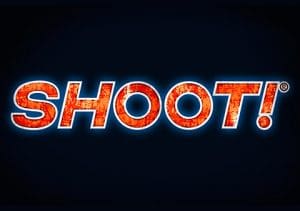 WHERE TO PLAY Shoot SLOT

Shoot is a 5 reel 50 payline video slot powered by Microgaming. It’s based on the iconic Shoot football magazine which started in 1969 and became one of the most popular sports magazines (I for one, loved it). It features some of the greatest footballers of all time including Maradona, Cryuff and Pele. You can play for as little as 50p a spin to a whopping £100 a spin.

You have the Shoot Bonus feature which is triggered by getting 3 or more Bonus scatter symbols anywhere on the reels. You will then enter the Trade ‘Em Bonus feature where you need to then pick 4 out of 12 cards to reveal hidden prizes.

In the Free Spins Bonus feature, you can win between 10 and 35 free spins. All free spins though come with a 2x multiplier (meaning all wins are doubled) which can really boost your winnings. In the Magazine Bonus feature, you are presented with 12 magazines and you make picks until the red card is found. There are 2 red cards hiding in the 12 picks so be careful. Successful picks will reward you with cash prizes.

If you’re a football fan and used to read the Shoot (and Match) magazines as a youngster (before the internet came about), you’ll enjoy the Shoot slot game for a short while. Unfortunately, sports-themed slots like this one really don’t do it for me.

Microgaming have launched subsequent football-themed slots and Cricket Star (in February 2015) which aren’t that appealing to me personally. Microgaming have created much better slots like Immortal Romance, Terminator 2 and Jurassic Park. Saying that, you should try Playboy (also by Microgaming) which is nice on the eye and a very good game in terms of potential wins and bonus features.