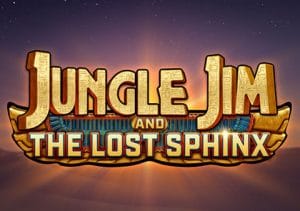 WHERE TO PLAY Jungle Jim and the Lost Sphinx SLOT

After hunting for El Dorado’s gold, Microgaming’s favourite adventurer is now on the hunt for Egyptian Riches in the Jungle Jim and the Lost Sphinx slot. Played using a 5 reel, 35 payline game engine, successive Rolling Reel wins can trigger multipliers of up to 10x in the base game and 20x in the free spins round. Play this medium variance game on your computer, tablet or mobile from between 10p and £20 per spin.

Head to the Sahara dessert

The base game action takes place on a 5 reel, 35 payline machine. With the sands of the Sahara in the background, you’ll see the reels set within a block of hieroglyph-filled stone. There are 4 lower value gemstones as well as a pot, a treasure chest and a mystery book. Jungle Jim is the best of the standard symbols. There’s also a wild that can land anywhere apart from reel 1.

After a winning combination lands, the successful symbols are removed and new ones replace them. Known as the Rolling Reels feature, these rolls keep on coming as long as a new winner combination hits. Each successive roll also brings a multiplier into play. The more consecutive wins, the bigger the multiplier:

If you get to the 3rd roll but miss out on a winner, you’ll activate the Second Chance Respin feature – it gives another chance to get a winning combination and increase the multiplier to 5x and then 10x. Once the rolls are over, you’ll return to the standard 35 payline reel set with a 1x multiplier.

Land 3 or more of the Sphinx scatter on the same spin to trigger the Free Spins feature. On offer here are 12 free spins on a 50 payline machine. Just as in the base game, Rolling Reels and multipliers are central to the action in the feature. The numbers on offer are bigger though.

Double multipliers in the free spins

A standard win in the free spins round is doubled. Each successive roll win then benefits from a 3x, 4x, 8x, 12x or 20x boost. Land a Sphinx on the middle reel during the feature and it takes you up to the next multiplier level. You’ll also have the option to play with the Win Booster feature active. This increase in stakes means that you’ll only need to land 2 rather than 3 scatters to trigger the Free Spins feature.

There’s plenty going on in Jungle Jim and the Lost Sphinx thanks to the Rolling Reels and multipliers. These can really come into their own during the bonus round. Payouts can reach up to 6,250 times your bet on each free spin. As far as variance goes, we’re in the medium range.

If you enjoy the treasure hunting theme, then Jungle Jim and the Lost Sphinx is a video slot to consider. If you really like the theme, we advise you also try the original, Jungle Jim El Dorado, which is equally as good