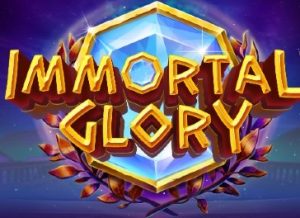 WHERE TO PLAY Immortal Glory SLOT

Join a trio of athletes from ancient Greece and try and land some Olympian jackpots in the Immortal Glory slot. Created by Just For the Win and Microgaming, it’s a 5 reel, 40 payline video slot that comes with a cracking bonus round that awards free spins complete with nudging wilds. Look out too for Glory Spins which can deliver multipliers of up to 10x. There’s also a chance to land jackpot prizes of up to 10,000x your bet. Find out more about this super volatile slot in our detailed Immortal Glory review.

The action in the Immortal Glory slot plays out on a 5 reel, 4 row, 40 payline machine. Winners are formed by landing 3 or more matching symbols in one of those paylines, starting from reel 1.

Stakes start at 10p per spin, rising to a maximum of £25 per spin. To adjust your bet levels, click on the coins symbol in the top right-hand corner of the screen then move the carousel.  You can set the autoplay mode in the same way. You can run up to 100 autospins. There are no win or loss limits available but there is an option for quick spin mode. The bet levels and autoplay can be a bit fiddly to set up but are straightforward enough.

If you like high variance action you should enjoy this ancient adventure. The volatility is extremely high so be warned. The Immortal Glory RTP is 96.19% which is in the middle of the pack. The hit rate is 21.6%. That means you’ll land a winner around once every 5 spins on average. The maximum payout of 10,000 x bet is non-too shabby though.

The virtual trip to ancient Greece comes with some tidy extras. The highlight is the high variance feature round that awards free spins with nudging wilds. Hope to land a trio of jackpot symbols as these can deliver instant wins of 20, 100 or 1,000 x your bet. Let’s have a closer look.

Central to much of the best action in Immortal Glory is the flaming torch symbol which is the wild. This spins in stacks that are 4 symbols high and can appear on all 5 reels. The Free Spins feature is triggered in a slightly unusual manner. Instead of landing scatters, it’s triggered when a wild appears on reel 1 and 1 other reel. You can then look forward to 5 free spins. That doesn’t sound like much of a haul.

Look out for nudging wilds though. When a wild lands, it nudges up or down by 1 position with each free spin that follows until it fills the whole of that reel. It then drops off the screen. You can land more than 1 nudging wild on the same free spin which can lead to some big potential combinations.

The Glory Spin feature is activated if there’s a wild on the reels after your fifth and final free spin. You’ll then get a free spin where any winning combination is boosted by a 2x, 3x, 5x or 10x multiplier.

The other symbol to keep a special eye out for is the gemstone. When this appears on reels 1, 3 and 5 on the same spin you’ll trigger the Jackpot feature. This offers the chance to land an instant win of some 20, 100 or 10,000 x your total bet. An ancient arena, packed full of adoring fans, marble columns and flaming cauldrons form the backdrop to the action in the Immortal Glory slot. It’s all very impressively done. It’s not just the imagery that impresses. The stirring soundtrack with blasts of trumpets does too. It creates plenty of atmosphere.

All the symbols on the reels relate to the ancient theme. In order of value are sandals, a discus, a shot putt and a laurel wreath. The most rewarding symbols are the 3 athletes. These spin in stacked formation and can fill whole reels.

The female shot putter in traditional costume is the most lucrative standard symbol, paying 0.7, 1.5 or 5x your stake if you land 3, 4 or 5 in a line. The same rewards are on offer from the flaming torch wild.

The sound and visuals in the Immortal Glory mobile slot impress on smaller screen devices. You’ll find the same volatile gameplay as the desktop version. It’s a well-constructed overall package.

There seems to be an endless appetite for all things ancient from slots developers and players. Immortal Glory is an impressive addition to this already crowded field.

The sound and visuals are impressively done. The gameplay is relatively straightforward but can really pack a punch courtesy of the nudging wilds in the free spins. There are also the potential jackpots to consider too.

Take care though, the Immortal Glory volatility is enormously high. If you like high variance action, this trip to the ancient arena should appeal. If you want more ancient adventures, the Age of the Gods slot by Playtech is a great place to start.

What is the Immortal Glory slot RTP?

The Immortal Glory return to player rate is 96.19%. That’s a pretty standard number for a slot released in this day and age. On average, you can expect to land a winning combination around once every 5 spins.

What is the Immortal Glory volatility?

If you like slots that offer high risk action, you’ve come to the right place. Immortal Glory is an extremely volatile slot. You can expect lengthy spells when your bankroll will float away into the ancient Athenian ether. The free spins and jackpots can deliver some big action though – up to 10,000 x bet.

Is Immortal Glory a jackpot slot?

Immortal Glory doesn’t offer any progressive jackpot prizes. There are a trio of Immortal Glory jackpots up for grabs though if you land gemstones on reels 1, 3 and 5 on the same spin. These can deliver prizes of 20, 100 or even 10,000 x your bet.

What are the Immortal Glory features?

The main bonus is the Free Spins feature. Once triggered, you’ll receive 5 free spins complete with nudging wilds. There’s also a Glory Spin feature where any win you achieve is boosted by a multiplier of 2x, 3x, 5x or 10x.