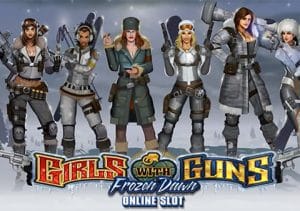 WHERE TO PLAY Girls with Guns Frozen Dawn SLOT

After taking on the drug lords of South America, the Girls with Guns are back for a second mission in Frozen Dawn, a 5 reel, 243 ways to win video slot from Microgaming. The sequel comes with a base game pick me round as well as two free spin features where magnetic or frozen wilds are added. Play from between 30p and £22.50 per spin.

The same cast of characters are back for Girls with Guns Frozen Dawn – instead of drug baron Hector, the intrepid gals are headed to the Pole to try and stop the evil Saskia and her plans for world domination. Set against a wintry backdrop, the reels include lower value playing cards from A to 10 as well as Saskia’s base and a pair of bodyguards.

The Girls with Guns are the higher value symbols – there’s infiltrator Jess, tactics expert Zoe, demolition ace Alex, sniper Kira, artillery gunner Maria and the leader, Katherine. Land 5 of her in combination for a payout of over 13 times your stake.

The Girls with Guns logo is the wild – 5 of these will see you pocket 20 times your stake. Look out too for the silhouette symbol featuring our heroines. When it lands on reel 3, it will expand and turn into a stacked wild. Girls with Guns Frozen Dawn comes with a number of features which are described below:

Shootout Bonus feature – this can be triggered at random on any unsuccessful spin. 1 of the girls will appear and a gun’s target will focus on the lower value playing card symbols. Pick 1 of the targets and you’ll win a prize of anything up to 20 times your stake.

Of more interest are the 2 free spin features. To trigger them, you’ll need to land 3, 4 or 5 satellite scatter symbols anywhere on the reels. You’ll then be awarded 12 free spins with a randomly chose added extra.

The other extra is the Magnetic Wilds feature – these appear on reel 5 only. On the following free spin, they will be dragged to the next available position to the left. If you form a full stack of 3 wilds on the same reel, they will explode on the next free spin. Wilds can remain in play for the whole of the free spins.

If we had preference, it was for the Frozen Wilds – both can pack a pretty decent payout punch though. We’d put the overall variance in the medium range.

Just like the original, Girls with Guns Frozen Dawn is a good looking game – the comic book style visuals are nicely done and the brooding, atmospheric backing track matches the theme rather well. The theme is faintly ridiculous but the action in Guns with Girls Frozen Dawn is pretty impressive. If you like your video slots play to come with an explosive flourish or 2, then these girls and their guns should be very much to your liking.