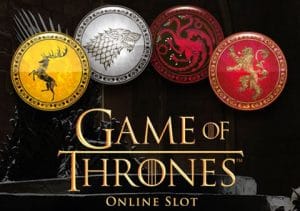 WHERE TO PLAY Game of Thrones SLOT

The game is sure to become a huge hit as the television series which is HBO’s most popular series of all time! Game of Thrones is based on the best-selling book series written by George R.R. Martin with the books and television series winning multiple awards and nominations throughout the world. If you haven’t watched Game of Thrones, well, you should as you’ll be hooked.

There is a Free Spins feature where you get to serve one of the 4 great Houses of Westeros as each has their own feature. You can activate the feature by obtaining 3 Game of Thrones logo symbols simultaneously on the reels. Each House represents a different number of free spins, a unique multiplier with a unique number of stacked symbols – here are the options:

If you get 3 Game of Thrones symbols during any of the house features, you will retrigger it meaning more free spins. I’ve played all 4 Houses and to me Baratheon House was kindest to me – this was due to the fact that I got 4 wilds on a payline. If you combine that with a 5x multiplier, I had a very good day! There’s a whopping 20,250 times your stake to be won which is appealing but my best return was a superb 450 times my stake.

There is also a Scatter Bonus feature which is a small consolation for not triggering the free spins feature – 2 Game of Thrones symbols will give you a cash prize. There is a Gamble Trail feature too which is standard but the good thing is that you can watch footage of the television series as it takes you on a journey through the kingdoms of Westeros and Essos.

In terms of the 2 different versions (15 paylines versus 243 ways to win), they are identical in appearance and gameplay (which is amazing in my opinion) but there are differences in how it pays out. It’s a medium variance game (whichever version you choose) but the following might sway your decision either way.

I found Game of Thrones to be a very good video slot with decent win amounts and fairly frequently – it has a good balance between volatility and entertainment and I expect it to be one of Microgaming’s most popular slots in years to come. Saying that, I would still rather play Immortal Romance.

You can play Game of Thrones (and Immortal Romance) at Mr Green Casino – the instant play casino has more than 300 slots from Microgaming, NetEnt and IGT amongst others. CasinoManual.co.uk readers are welcomed with an exclusive £5 no deposit bonus as well as a 100% match bonus up to £100 on their first deposit.