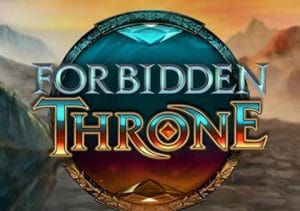 WHERE TO PLAY Forbidden Throne SLOT

Join the Legendary Guardians Wulthor and Sorconass in the fantasy epic Forbidden Throne. Powered by Microgaming and available on all devices, it’s a volatile 5 reel, 40 payline video slot that comes with stacked wilds and a feature round that awards plenty of free spins. Try and claim the royal seat from between 40p and £200 per spin.

As you’d hope from a Microgaming game, the design here is very high-end and reminiscent of a video game. Rugged mountains featuring the fire and ice theme dominate the backdrop to the reels – those reels include a selection of jewel symbols as well as a book of spells and a crown.

Joining the standard symbols are a unicorn, a flaming phoenix, hilltop citadel and the Legendary Guardians – Wulthor, the Elven Lord of Fire and the scantily clad Sorconass, the Queen of Ice. All of these symbols can land as stacked wilds, replacing everything apart from the scatter and turning whole reels into wilds. This means there’s a Wild Reels feature with a minimum of 1 wild reel and up to 5 wild reels on every spin.

Forbidden Throne comes with a Free Spins feature – to trigger it, you’ll need to land 3, 4 or 5 of the orb-encrusted shield on the same spin. You’ll then be awarded 10, 20 or 30 free spins. If 3 or more orbs land during the feature, an extra round of free spins will be added to your tally. More importantly, you will get up to 5 wild reels on each free spin – or a minimum of 1.

Claimants to the Forbidden Throne will need deep pockets as well as nerves of steel – as this is an extremely volatile title. You can expect lengthy spells when your bankroll will head south quickly. The upshot to the extremely high variance is that it’s possible to scoop a big prize from a single spin – up to 500 times your stake.

As far as design goes, this is a very accomplished game – the visuals are detailed and super sharp. The range of features isn’t especially wide but the stacked wilds deliver plenty of action and the free spins offers plenty of potential.

With the likes of Games of Thrones and The Last Kingdom proving so popular on TV, it’s no surprise that slots developers are adding more sword and sorcery slots to the online casino shelves. With its classy visuals and hard hitting extras, this is a good one. I also recommend you try Yggdrasil Gaming’s Double Dragons which also has a fantasy theme.