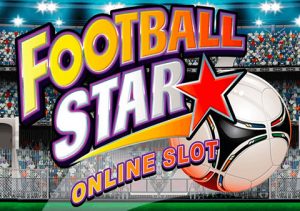 WHERE TO PLAY Football Star SLOT

Football Star is a Microgaming-powered video slot with 5 reels and 243 ways to win. With an obvious football theme, it can be played across desktop, mobile and tablet devices from 50p to £50 per spin. Symbols on the reels include football shirts, referees, football boots, football stadiums, strikers and goalkeepers – it’s not the best/most original looking game around but the features make up for that.

Firstly, the Rolling Reels feature applies in the base game – if you get a winning combination, the contributing symbols disappear to be replaced by new ones. This gives you the chance to win time and time again from every single spin.

Then, you have the Striking Wild Bonus feature which is triggered at random in the base game when there is a possibility of a winning combination. A Striker takes a shot at the reels turn 1 reel (either reel 2, 3 or 4) completely wild.

The good news is that stacked wilds appear on reels 3, 4 and 5 in both the base game and Free Spins feature which really boosts your winning potential – especially if you combine it with the Striking Wild Bonus feature.

The multiplier begins at 1x and with every Rolling Reel, the multiplier increases to 2x, 3x, 4x, 5x and then 10x! This means wins will be subject to a massive 10x multiplier if you get 5 consecutive winning combinations, on every single free spin. The only downside is that you cannot retrigger the feature.

Football Star is a medium variance video slot which won’t win any trophies for looks but certainly for its bonus features. You can win a maximum of 433 times your stake in the base game and a whopping 2,114 times your stake in the Free Spins feature (due to the 10x multiplier). Overall, a very good video slot from Microgaming! If you like football themed games, NetEnt’s Football: Champions Cup is highly recommended.