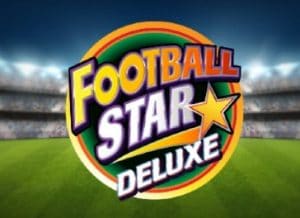 Microgaming and Stormcraft Studios have teamed up once again to bring us a sequel to their popular Football Star. The Football Star Deluxe slot keeps the atmosphere of the original but has suped up the features to deliver even more volatile gameplay. You’ll discover in our Football Star Deluxe review about Rolling Reels, football player symbols that can turn whole reels wild and a bonus round that awards free spins complete with growing wilds and a multiplier trail that can boost payouts by up to 8x if you get on a winning run. You can choose from 18, 38, 68 or 88 paylines with the RTP going up to 96.88%.

There’s plenty going on in Football Star Deluxe as far as gameplay is concerned. Central to the action are the Rolling Reels which keep the base game action ticking over. The best opportunities arise in the bonus round though. Let’s take a closer look.

Football Star Deluxe uses a Rolling Reels feature which can be found in other Microgaming slots like Thunderstruck II.  That means that when a winning combination is formed, those successful symbols are removed to make way for new symbols. The rolls continue as long as a winner is created.

Football player symbols can randomly appear on the middle 3 reels during the base game. These turn the whole of that reel or reels wild and are guaranteed to create a winner. A reel roll then follows. The stacked wild remains locked in position for the remainder of the reel rolls in this set. The Free Spins feature is triggered by landing 3 or more scatters on the same spin. Your reward here is 5, 25 or 250 x your total bet as well as 12 free spins. There are a couple of extras available during the free spins that can really pep up the action too.

You can keep an eye on the size of the multiplier in the meter to the side of the reels.

Wilds can appear in super stacked formation everywhere apart from reel 1 during the free spins round. The stack of wilds increases by 1 on each free spin. By the end of the round you can expect to see some very lengthy trails of Growing Wilds.

The Football Star Deluxe slot is played using a 5×5 reel grid. You’ll have the option to play with 18, 38, 68 or 88 paylines active. The bet levels change depending on how many paylines you play with. With all 88 paylines active, stake levels range from a minimum of 88p per spin, rising to a maximum of £44 per spin.

As with all Microgaming slots, you can choose the Autoplay option where you can set the desired number of spins. There’s also a Turbo/Quick spin mode if you wish.

The design here might be simple (we’ll take a closer look at the sound and visuals shortly) but this is a surprisingly fiery slot. The Football Star Deluxe volatility is high. This is a high variance slot and the max win is 3,200 x your total bet.

The RTP rises with the number of paylines in play so we’d recommend going for the maximum 88. In that instance, the RTP is 96.88%. Here are the RTP rates for all options: The design in Football Star Deluxe owes as much to video game versions of the beautiful game as the live version. It was released to coincide with the now-cancelled Euro 2020 tournament.

With packed stadium stands and a pitch in the background, the reels are made up of boots, a shirt, a ref, a scoreboard and 5 players. The most rewarding of these is the Ronaldo-esque player in the red shirt and green shorts who pays over 6.68 x your total bet if you land 5 in combination.

The visuals are bright, colourful and very clear. It’s not the most sophisticated slot you’ll see as far as design is concerned but that’s no great surprise given the theme. It does the job pretty well.

The game interface appears in the shape of a referee’s watch. It’s easy to set bet levels, autoplay, turbo mode and the life with a single click here. Again, it’s simple but straightforward.

The rather basic visuals might trick you into thinking that Football Star Deluxe was a rather gentle slot when it comes to volatility. That’s really not the case. This is a volatile game and the variance here is high.

If you like volatile gameplay there’s plenty to enjoy here. The rolling reels deliver plenty of action in the base game but it’s the Free Spins feature that offers the most potential courtesy of the expanding wilds and increasing multipliers.

We wouldn’t quite put Football Star Deluxe in the Ronaldo or Messi class. It’s a perfectly solid performer though and if you like soccer-themed slots it well worth considering. Another football themed slot you should try is NetEnt’s Super Striker which was released around the same time and has plenty of extras.

❓ What is the Football Star Deluxe RTP?

If you’re playing with all 88 paylines active, the RTP is 96.88% which puts it on the high side. This is a volatile slot game though so expect a stream of small sized wins. The bigger wins will come in the Free Spins feature due to the increasing multiplier which can reach 8x.

The Football Star Deluxe slot offers a top payout of 3,200 times total bet per free spin. This can be won in the Free Spins feature as the multiplier can increase up to 8x if you benefit from consecutive winning combinations.

🎰 Can you play Football Star Deluxe on mobile?

⚡ Is there are a Football Star Deluxe free spins feature?

Yes, trigger the Free Spins feature and you’ll win 12 free spins. These come with expanding multipliers which can reach up to 8x if you land 5 or more successive Rolling Reel wins. Look out too for stacked wilds that expand with each free spin.