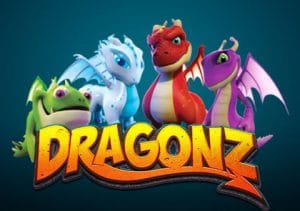 WHERE TO PLAY Dragonz SLOT

Dragonz is a 5 reel, 243 ways to win game from Microgaming that is full of original bonus features. Available to play on all devices from 40p to £30 a spin, you go on an adventure with Flint, Switch, Frost and Gobble in this wild focused video slot.

Graphically, and as you’d expect from a Microgaming title, Dragonz has a cinematic quality with 3D graphics and animations. With a cartoon, feature film feel, you will see the 4 Dragonz on the reels as well as regular playing cards. There’s also a scatter and wild with the latter being the most rewarding symbol with 600 times your line stake for 5 on a payline.

The wild is important as it can land on the middle reel in the base game and trigger the Wild Deal feature when you don’t have a winning combination. More wilds are then added to the other reels to guarantee you a winning spin – I found this feature activates quite regularly too.

Flint feature – with 10 free spins, Flint sets the reels alight with Flaming Wilds. Flint can fire wilds onto the reels with an increasing number of wilds each time he fires!

Switch feature – with 10 free spins, Switch sets sparks flying as he taps into the electric power of Stashed Wilds. Non-winning wilds are stored and when 3 are collected, they will be randomly added to the reels to give you a winning combination. The free spins do continue, past the allotted 10, until all wilds have been distributed.

Frost feature – again with 10 free spins, Frost gives you Frosty Wilds as he freezes non-winning wilds in place until the form part of a winning spin. As with the Switch feature, the free spins keep on coming until no frozen wilds are present on the reels.

Gobble feature – with 10 free spins, Gobble randomly spits wild symbols onto the reels and, in the process, creating Winning Wilds. These winning wilds remain locked until no longer part of a winning spin. This is the most lucrative of the features in my opinion with plenty of free spins with locked wilds in place!

Dragonz may have a cutesy/Disney animation picture feel to it but there’s potential for big wins – in fact, there’s up to 3,583 times your stake to be won on each spin! I found the Gobble and Switch features the most rewarding though.

Saying that, I’ve had 7 wilds in the Wild Deal feature which resulted in a huge win of nearly 2,000 times my stake. Medium variance, it’s a superb offering from Microgaming. I also recommend you try the classic Immortal Romance which has even bigger winning potential.