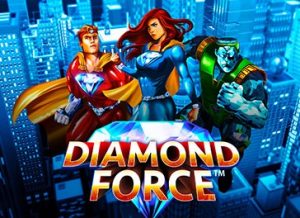 WHERE TO PLAY Diamond Force SLOT

A quartet of powerful superheroes can combine to deliver big rewards in the super volatile Diamond Force slot. Created by Crazy Tooth Studio for Microgaming, it’s a 5 reel, 1,024 ways to win video slot. Highlights include special Team-Up Spins which play on new reels and deliver cash prizes which you can boost with multipliers.

Trigger the Team-Up Bonus feature for at least 3 free spins with even more cash and multipliers prizes. Re-triggers can take the number of spins up to 20 here. Since Marvel departed the scene, we’ve been waiting for a classic new superhero slot. Is this it? Find out in our in-depth Diamond Force review.

The features in Diamond Force are a little unusual. You won’t find the standard selection of bonuses here. Even the re-spins and free spins offer something different.

The four Diamond Force superhero character symbols spin in stacks that are 3 symbols high. If you land 3 or more of these stacked characters on the same spin, you’ll trigger the Team-Up feature. Those 3 stacks can come in any combination. You could have three of the same character or two or three different characters.

You’ll then head to a new machine. The number of reels in play here varies depending on how many of the scattered Diamond Force members triggered the round.

3, 4 or 5 stacks delivers a 3, 4 or 5-row machine. Each superhero has their own special reward in the form of a credit or a 2x, 3x or 5x multiplier. One spin then follows. Any credit amounts that land on that spin are added together. If you land a multiplier, the credit total is boosted by that multiplier.

Better still is if you land more than 1 multiplier. Their values are combined. For example, 2x and 5x multipliers on the same spin would deliver a 10x payout rocket.

If you land a stacked scatter symbol on reel 5 as well as 2 or more stacked Diamond Force character symbols, you’ll bring the Team-Up Bonus Spins feature into play. These are very similar to the Team-Up spins except you’ll receive 3 of them rather than one.

The other major change is the addition of +1, +2 and +3 symbols to the bonus reels. As you’d expect, these add 1, 2 or 3 extra free spins to your total each time they appear. You can land up to 20 free spins during this feature.

Diamond Force uses a 5 reel, 3 row, 1,024 ways to win game engine in the base game. Rather unusually, you don’t need to start a winning combination from reel 1. Land matching symbols on reels 3, 4 and 5 and you’d still land a winner.

The minimum bet here is 10p per spin. The max is £10 which is more than high enough for most players but might not be enough to satisfy millionaire high rollers. The RTP rate is a competitive 96.53%.

You’ll have the option to play with autoplay active. You can choose between 10 and 100 free spins. There are also facilities to set win and loss limits as required.

The range of extras here might not be massive but Diamond Force can still deliver a pretty hefty punch. This is a high variance slot. Most of the time, you won’t win big – if you do, you can win up to 13,175 x bet on each spin/free spin!  That tantalizing prospect is there though, especially if you get on a roll with the Team-Up Bonus spins and the multipliers work their magic.

The visuals here aren’t quite a slick as we expected. In fact, despite the futuristic, superhero theme, the imagery felt a little dated. Set against a city scape backdrop, the reels include A to J royals, the 4 members of the Diamond Force and a wild that can land on reels 1 and 5 only.

The stacked character symbols are decent enough but there’s an almost soft focus to them that doesn’t work that well. They’re acceptable sure, but the design doesn’t really sparkle here. We could say the same about the electro backing track. It’s solid enough but there’s no potential earworm here.

This isn’t the most intuitive set up. It takes a couple of clicks to reach the paytable. Even when you’re there, it’s not the easiest to navigate. Scrolling up and down isn’t entirely straightforward. It’s only a small thing, but it’s not as easy as it should be. The same design caveats about playing Diamond Force are even more evident if you’re playing on a mobile device.

There’s a Marvel-sized gap in the online casino market waiting to be filled with a 5 star superhero-themed slot. Diamond Force has its charms but doesn’t quite deliver the goods. If you want superheroes, Justice League or Man of Steel by Playtech should do the trick.

The Team-Up extras are nice variations and you can expect to see them regularly. It can feel a little repetitive though. The high variance makes it pretty feisty and it has good win potential (up to 13,175 x bet).

The design isn’t Premier League class either. The elements are almost there but don’t quite come together. Diamond Force is playable enough, especially for fans of volatile slots. It could have been even better though.

❓ What features does Diamond Force have?

The Team-Up spins deliver credit awards which you can boost with multipliers. The bonus round delivers at least 3 free spins but you could get up to 20.

🥇 What is the RTP of Diamond Force?

The Return To Player rate in Diamond Force is 96.53%. You’ll find some slots with a higher RTP but this number stacks up pretty well against the majority of online slots.

🎰 Does the design in Diamond Force dazzle?

Not really. The design feels a little flat here. The sound and visuals are solid rather than spectacular. If you like slots with lush imagery, you might be a little underwhelmed with what’s on offer here. To compensate, you can win 13,175 x bet on each spin.

⚡ How volatile is Diamond Force?

Very. Diamond Force is a volatile slot. Expect plenty of lean spells. The combining multipliers can get things moving during the bonuses though and lead to 13,175 x bet payouts per free spin.