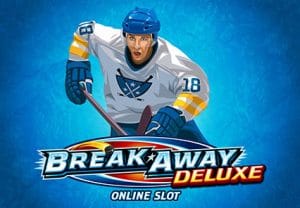 WHERE TO PLAY Break Away Deluxe SLOT

Get your skates on and head to the rink in Break Away Deluxe, an ice hockey-themed video slot from Microgaming. Played using a 5×5 grid, it comes with plenty of extras including Rolling Reels, sticky wilds and a free spins round complete with expanding multipliers. Look out too for super stacked wilds. Play this colourful, volatile game on all devices from between 18p and £44 per spin.

Your first decision in Break Away Deluxe is to decide how many paylines are active. You can choose from 18, 38, 68 or 88. This will affect your bet level. Anyway, the design here is pretty good. There aren’t any lower A to 10 royal values here, all the symbols relate to the ice hockey theme. In order of value are a Zamboni, skates, helmet, rink and an assortment of players and a ref. The best paying symbol is the player in the red jersey.

The action here uses the Rolling Reels feature. After a winning spin, the successful symbols are removed and new ones drop in and replace them. These continue as long as a new winning combination hits. On any spin you could benefit from the Smashing Wild feature – 1 of the hockey players random turns wild. This symbol remains wild for the duration of this set of Rolling Reels. These Smashing Wilds can appear on reels 2, 3, 4 and 5 only.

The main feature is the Free Spins feature – it’s triggered by landing 3 or more scatters on the same spin. You’ll then receive 12 free spins. They come with a couple of tasty extras too. Each consecutive Rolling Reel win in the free spins round is boosted by the Multiplier Trail feature.

The more wins in a row, the bigger the multiplier gets. It starts at 2x on the first roll then rises to 3x, 4x, 5x and 8x following rolls 2, 3, 4 and 5.  Also in play during the feature is the Growing Wilds feature. These super stacked wilds can appear anywhere apart from reel 1. They increase in length by 1 symbol with each free spin.

Ice hockey isn’t near the top of our must watch sports so we didn’t have overly high hopes for Break Away Deluxe. It proved to be rather good though. The cartoon design works well and there’s a decent variety on offer from the gameplay. It’s volatile too with top wins of 3,181.81 times your bet on every free spin.

Put all that together and Break Away Deluxe becomes a playable game. And more entertaining than a real hockey game where we can barely keep up with the puck! If you like video slots based on sports, Bicicleta from Yggdrasil Gaming and Football: Champions Cup from NetEnt would be my picks.