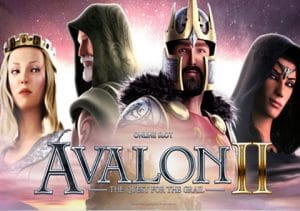 Avalon II The Quest For The Grail: Demo

WHERE TO PLAY Avalon II The Quest For The Grail SLOT

Avalon II The Quest For The Grail is a Microgaming-powered slot game with 5 reels and 243 ways to win. The game has been developed following the success of the original Avalon which was released way back in 2006. Every aspect suggests this game will become an instant classic due to its graphics, animations and bonus features. Playable from 30p to £7.50 a spin, it has a classic good versus evil tale as your aim is to help Arthur regain the grail and return it to Avalon.

In the base game, you have 2 bonus features which are activated randomly. You have the Expanding Wild feature which gives you a wild reel on the 3rd and middle reel. However, then there’s the Merlin feature where Merlin himself can reward you with a cash prize or multiplier. When you don’t have a winning spin, you can get a multiplier up to 20 times your stake but for a winning spin, you can get up to 4 times your stake.

You have the Lake of Legend feature first where you want to complete Excalibur by reforging the sword fragments. Roll the dice to reward you with a multiplier equivalent of that number. You have 10 rolls with a 15 times your stake prize on top of your wins if you manage to reforge Excalibur. Any subsequent rolls will give you 6 times your stake each.

The Misty Value feature allows you to select your wild symbol. You will get 15 free spins with a choice of 1 of the high value symbols to become an extra wild (with a 2x multiplier). Now you’ve played the 2 bonus features, you will have to make a choice between the third and fourth respectively.

Whispering Woods feature is the third and allows you pick from 5 shields – pick 1 in hope of finding the highest multiplier. Here you can win from 10 times your stake up to 160 times your stake. Forest Falls feature is the fourth feature where you’re rewarded with 20 free spins. This feature benefits from Trailing Wilds – when a wild symbol appears on row 1 or 2 (of any reel), it will trail downwards to cover the whole reel (for 1 spin).

Morgan’s Keep feature is a free spins game where you are awarded 20 free spins with wins doubled (2x multiplier). The game has Rolling Reels (like Immortal Romance) meaning that consecutive winning spins increase the multiplier up to a whopping 6x (by 1 for every winning spin).

Then you have the Hall of Shadows feature where you will win cash prizes for every move you make. If you successfully block or attack the onslaught from the black knight, you will win different cash amounts. This is where you hope to regain the grail.

Lastly, there’s the Avalon feature where you spin to wheels to win a bonus multiplier. There are 4 wheels with the 4th one only available if you get a zero on the third wheel. The final number forms the multiplier award (they are added up).

That’s 10 bonus features in total that Avalon II has – that’s a lot. Saying that, the game is a medium variance one with the bigger wins coming from the free spins features. Graphically the game is amazing and reminiscent of Lord of the Rings (theme wise) – it has some similarities to Immortal Romance which can only be good.

The maximum prize on offer is a huge 16,200 times your stake so you need to have luck on your side. Out of the bonus features, my favourite is the Forest Falls feature as the trailing wilds can generate nice wins if you get a few on a few free spins. If you like fantasy-themed slots, you should try Sultan’s Gold by Playtech or Pixies of the Forest by IGT.