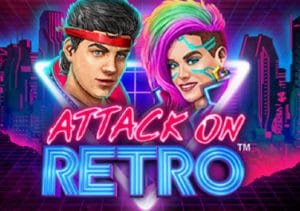 WHERE TO PLAY Attack on Retro SLOT

Head to the future, 2087 to be precise, in Attack on Retro a sci-fi-themed slot from Triple Edge Studios for Microgaming. The back story here is that Retro City is under attack and only a pair of wild cyberpunk heroes can save the city from destruction. Read our Attack on Retro review and you’ll find out about the randomly added wilds and how you can choose the number of free spins and multiplier combinations. All the free spins come with stacked wilds on reels 1 and 5. With Hyperspins active, you can also pay to respin a specific reel if you’re close to triggering the bonus round but need to land another scatter. What does the 2087 hold? Let’s have a closer look.

There’s plenty going on in the Attack on Retro slot as far as both design and gameplay is concerned. You shouldn’t be bored here as there are a number of extras to get stuck into. They include paid respins, a variety of free spin and multiplier combinations with stacked wilds as well as randomly added wilds.

Land a winning combination and the successful symbols from that combination are removed. New symbols replace them and a payout calculation follows.

Following every base game spin, you’ll be offered the chance to spin a reel again with the Hyperspins Respin feature. The price you’ll have to pay for the privilege depends on the current configuration of the reels. If you’re close to landing a big win, expect to be charged more than if there’s nothing immediately obvious on show.

This Random Wilds feature can trigger at random on any spin. Robot symbols are dropped onto the reels. If a laser blasts the robot, it turns wild. You could see anything up to 15 wilds appear on a base game spin when this feature goes live.

The free spins scatter can appear on reels 2, 3 and 4 only. Land 3 of this symbol on the same spin and you’ll pocket a payout of double your total stake as well as triggering the Free Spins feature. You’ll then have the choice of 3 free spin and multiplier combinations. The options are:

Regardless of which option you choose, you’ll have stacked wilds filling reels 1 and 5 throughout your free spins – this is known as the Wild Reels feature. The Random Wilds can land during the free spins too which can create some potentially spectacular combinations.

Land 2 or 3 scatters for a retrigger and an extra 5 or 10 free spins. These play out with the same multiplier active as the original free spins.

The 5 reel, 3 row machine offers 10 paylines. Stakes start at 10p per spin. The maximum bet is £20 per spin. This futuristic adventure is a volatile one. The variance is high so there’s the potential for some big bankroll swings.

The RTP in the standard game is 95.58% which is a little on the light side. It improves a bit if you opt for a respins, rising to 96.08%. That’s still not overly generous though. The maximum win per spin is 1,000 x your bet – add in the 5x multiplier in the Free Spins feature and you could win 5,000 x your bet on every free spin.

You can set between 10 and 100 free spins. There are also win and loss limits if you wish to use them. Click on the lightning bolt for turbo spin mode.

The pastel visuals and plinky plonky electronic backing track work just fine on a mobile device. A bit of bass from your speakers would be nice but even on a tinny mobile it’s all perfectly playable.

Attack on Retro Theme – 80s rendering of the future The design in the Attack on Retro slot is what the future was supposed to look like from the vantage point of the 1980s. Imagine a souped up version of ‘Back to the Future Part II’. Pinks and purples dominate the colour scheme.

On the reels you’ll find A to 10 royals as well as gadget gloves, keytars, ghetto blasters and hover boards. The hover board symbol pays up to 20 x your bet for 5 on a payline.

Unusually, Attack on Retro comes with 2 wilds – the cyberpunk pair Billy and Jesse. These substitute for all the standard symbols in a winning combination. The pair can both spin in stacked formation. Land 5 of Billy or 5 of Jess and you’ll win a payout of 100x your total bet. A 5-symbol combination that includes both wilds awards 50x.

Backing the action is an electronic backing track that nicks elements from Kraftwerk and New Order. It’s actually pretty good and certainly fits with the retro/future theme. The imagery isn’t the sharpest but again, the slightly blocky characters match the theme here.

The game interface is very straightforward. There are no difficulties adjusting stake sizes or checking the paytable. There’s a certain cheesiness to it all but it works rather well.

The day-glo design is rather in your face but that suits the theme of Attack on Retro perfectly well. As does the soundtrack. The gameplay matches the gaudy design too, offering plenty of variety and some potentially volatile action.

The stacked wilds can make the free spins round well worth winning, especially if you manage to combine them with the random wilds – for 5,000 x bet wins on every free spin.

It’s not the most sophisticated or elegant sci-fi-themed slot but Attack on Retro can deliver some surprisingly good action. If you like the sci-fi element, The X-Files by Playtech and Reptoids by Yggdrasil Gaming are well worth spinning.

❓ What is the Attack on Retro RTP?

🥇 Is Attack on Retro volatile?

Yes. The variance in this sci-fi-themed slot is high. You could go lengthy spells where the cashier only goes south. The free spin extras can get things moving though with wins of 5,000 x bet on each free spin.

🎰 What features does Attack on Retro come with?

The Attack on Retro features include up to 15 randomly added wilds and a feature round where you can choose from 3 different free spin and multiplier combinations. Reels 1 and 5 and wild throughout the free spins.

⚡ What is the design like in Attack on Retro?

Retro by name, retro by nature. There’s an old school look to the visuals here. Picture Marty McFly on his hoverboard, backed by a New Order-style backing track.