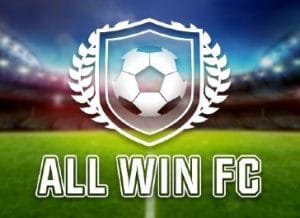 WHERE TO PLAY All Win FC SLOT

Football fans have another new game to try courtesy of All41Studios and Microgaming. The All Win FC slot is a 5 reel, 10 payline title that comes with some cracking extras. Highlights include wilds that expand and fill the whole reel whenever they hit. In the feature round you can look forward to free spins. The wilds again expand during the feature as well as upgrading symbols and added extra free spins. What else can you expect from this high variance slot? Discover more in our extensive All Win FC review.

Microgaming has kept thing relatively simple on the features front. It’s more of a direct, up and at ‘em style game rather than the slot equivalent of tiki taka. There are some good extras included too.

Wilds are central to much of the best action you’ll find in All Win FC. That wild is the golden trophy symbol that looks to be loosely based on the classic European Cup.

The wild can land on the middle 3 reels only. When it does, it expands to turn the whole of that reel wild. Things can get really interesting if you land more than 1 wild on the same spin courtesy of the expansions. The Free Spins feature is triggered by landing 3, 4 or 5 of the white and black football symbol anywhere on the reels on the same spin.

After a payout of 2, 20 or 50 x your total stake, you’ll go on to play 12 free spins. You can also retrigger the feature to give you a further 12 free spins.

The gold trophy wild can still appear on reels 2, 3 and 4, just like in the base. It expands to fill the whole reel whenever it hits too. The wild delivers even more extras during the bonus round though.

When a wild lands during the free spins round, you’ll benefit from a symbol upgrade. One of the higher value symbols (not the royals) will be upgraded to the next most rewarding symbol. This will be active for the rest of the round or until you land another wild upgrade.

You can see what symbols have been upgraded in the meter above the main set of reels. It’s possible to gain up to 6 upgrades in total. If you manage to get all the high value symbols morphed into the top paying symbol, you can quickly land some big combinations.

The game mechanic in All Win FC is pretty basic. That’s no bad thing though. The 5 reels and 3 rows combine to offer 10 paylines. To form a winner, land 3 or more of the same symbol in a payline, starting from the leftmost reel. The game engine is about as simple as you’ll find.

Stakes here start at 10p per spin but can get as high as £100 per spin. Autoplay is available if you wish. You can set this up by clicking on the arrows below the main spin button.

If all that seems pretty standard, it is. What makes All Win FC stand out is the variance. This is a super volatile slot so expect potentially big bankroll swings. The maximum you can win from a single spin is 500 x your total bet. That’s not the hugest figure you’ll see but still pretty chunky. The RTP is 96.12%.

All Win FC Theme – aimed at the football fan The setting for All Win FC is a football ground. You’ll see packed stands and a football pitch behind the dull grey reels. Joining the lower value A to J symbols are symbols elating to football supporters. In order of value are the big hat and horn, flag, football shirt and scarf, a fan drinking a soft drink and a woman in a jester hat.

The fan slathered with face paint is the most lucrative symbol, paying 50 x your total bet if you land a 5-in-a-row combination.

It’s all clear and crisp but very safe. All that was missing was the dreaded half and half scarf. This is aimed at the TV watching Champions League viewer than the Tuesday night in Hartlepool supporter.

The game interface is fine though. It’s easy to do everything from consulting the paytable to amending the bet levels. The visuals might be a little on the bland side but they’re colourful, clear and easy to view which makes All Win FC mobile very playable. The straightforward gameplay works well on mobile too.

This isn’t the most dazzling visual treat you’ll come across. The design in All Win FC is certainly on the vanilla side. If you want a better designed football slot, Super Striker by NetEnt should do the trick.

You can’t say that about the gameplay though. Yes, it’s simple but the expanding wilds and free spins with expanding symbols can make for exciting gameplay thanks to the sky-high variance. If you like football-themed slots, there are worse ones to try than All Win FC.

The All Win FC slot RTP is 96.12%. That’s not a bad return to play considering the volatility.

🥇 What’s the most you can win from a single spin on All Win FC?

The All Win FC maximum payout is 500 times your total bet from a single spin or free spin. It’s more likely in the Free Spins feature due to symbols upgrading to the highest value symbol.

🎰 Can you play All Win FC on mobile?

Yes. All Win FC is available to play on mobile and tablet devices as well as on a standard desktop or laptop.

⚡ Is the All Win FC slot volatile?

Yes, All Win FC is a high variance slot. The key to success is triggering the bonus round where the free spins, expanding wilds and symbol upgrades can combine quickly.