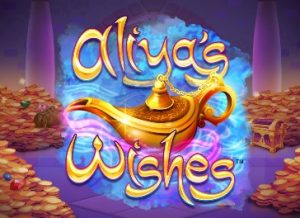 WHERE TO PLAY Aliya’s Wishes SLOT

Hope that a genie can make your dreams come true in the Aliya’s Wishes slot. Created by Fortune Factory Studios for Microgaming, this re-telling of the classic ancient story of the magical lamp comes with plenty of fresh gameplay. It has 5 reels and 20 paylines. Look out for Rolling Reels, stacked wilds and an expanding multiplier which increases with each successive win. There’s also a feature round that awards up to 20 free spins where the Win Booster, if active, can send payouts rocketing courtesy of multipliers that can reach a massive 50x. Are there treasures in store? Find out in our in-depth Aliya’s Wishes review.

The theme in the Aliya’s Wishes slot might be as old as they come but Microgaming has packed in some pretty fresh extras. They include Rolling Reels, expanding wilds, multipliers and free spins.

Land a winning combination and a symbol drop occurs. The successful symbols from the winning line are removed and new symbols drop in to replace them. A new payout consideration follows. If this results in another winning combination being formed, the process is repeated.

Successive symbol drop wins also bring a multiplier into play. This starts at 1x then rises to 2x, 3x and 5x. After a winless symbol drop, the reels go back to their standard state and the multiplier reverts to 1x. The Rolling Reels feature has been used in plenty of Microgaming slots like Immortal Romance and Thunderstruck II. The Free Spins feature is triggered by landing 3, 4 or 5 of the bonus scatter symbol (the magic lamp) anywhere on the reels on the same spin. Your reward is 10, 15 or 20 free spins.

The symbol drop game engine is active during the free spins, just like in the base game. Re-triggers are possible too. Land 3, 4 or 5 scatters to add another 10, 15 or 20 free spins to your tally.

The big difference here is that the value of the multipliers increases. Instead of multipliers of 1x, 2x, 3x and 5x, you can send your payouts soaring by 2x, 5x, 8x or 21x in the free spins. This works pretty much like NetEnt’s Gonzo’s Quest in case you’re wondering.

You can take those potential multipliers even higher if you activate the Win Booster feature.  It’s not a particularly cheap option as it doubles your bet in the base game. It can really come into its own when you trigger the Free Spins feature.

With the Win Booster active, the multiplier values awarded for successive Rolling Reel wins are 5x, 12x, 21x and 50x. To activate the Win Booster feature, click on the blue gemstone to the left-hand side of the reels.

The game engine here is made up of 5 reels and 3 rows which combine to offer 20 paylines. Winners are formed by landing 3 or more matching symbols in a payline, starting from reel 1.

Stakes start at a minimum of 10p per spin. In standard mode, this rises to a maximum of £30 per spin. If you want to activate the Win Booster, the maximum bet size is £60 per spin.  Autoplay is available, as is turbo spin mode if you want to ramp up the pace.

The gameplay in Aliya’s Wishes is simple. It can deliver some high risk, high reward gameplay though. This is a volatile slot and the variance is very high. The max win is 3,715.3 x your total bet per free spin (with the potential 50x multiplier).

The RTP here is 96% if you’re playing in standard mode. With the Win Booster live the Aliya’s Wishes return to player rises to a more reasonable 96.5%. The design in Aliya’s Wishes is very impressively done. The setting is a colourful Arabian village. Instead of generic lower value royals, all the symbols here relate to the theme. You’ll see pots of tea, jewels, swords, money pouches and spices. They’re ornately designed and packed full of detail.

More rewarding are the 5 characters symbols. These too are very finely drawn. It’s all very easy on the eye. The most rewarding standard symbol is the blue-faced genie which pays 1x, 3x or 15x your total bet if you land 5 on a payline. Those same payout amounts are on offer from the gold treasure box which is the wild. This replaces all the standard symbols in winning combinations.

Aliya’s Wishes is available to play on mobile. The visuals impress on small screen devices, just like their desktop equivalents. With the simple gameplay, it’s a good pick to play using a tablet or mobile device.

The tale of the genie and the lamp has been re-told many times in online slot form. The adaptation in Aliya’s Wishes is rather good.  The visuals here are terrific, packed full of detail yet also super sharp. The Rolling Reels game engine keeps things ticking over in the base game but can really explode during the feature, especially if you have the Win Booster active.

Be warned though, Aliya’s Wishes is a high variance slot. We liked Aliya’s Wishes. Its combination of classy imagery and volatile gameplay give fresh life to this ancient theme.

What is the Aliya’s Wishes slot RTP?

The Aliya’s Wishes return to player rate (RTP) in standard mode is 96%. If you decide to activate the Win Booster feature, the RTP increases to a rather more reasonable 96.5%. The multipliers can also increase up to 50x in the Free Spins feature.

The Aliya’s Wishes slot offers top wins of 3,715 times your total bet on each free spin. This can be achieved if you get consecutive wins and increase the multiplier to 50x which is available using the Win Booster feature.

If you activate the Win Booster feature, the value of the multipliers that are applied if you land successive symbol drop wins increases to 5x, 12x, 21x and 50x. Playing with the Win Booster live doubles your total bet per spin in the base game.

Yes. Land 3, 4 or 5 of the magic lamp scatter symbol on the same spin and your reward is 10, 15 or 20 free spins. The multipliers awarded for consecutive symbol drop wins in the free spins rise to 2x, 5x, 8x and 21x or even higher if you have the Win Booster active. You can also retrigger the play up to 40 free spins.