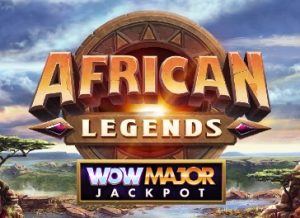 Head to the wild plains of Africa where monolithic stone beasts thud onto the reels in the African Legends WowPot slot. This fresh take on the safari theme comes from Microgaming and is played using a 5 reel, 243 ways to win game action. Central to the action here are Rolling Reels where winning symbols are removed from the grid and replaced by new ones. Get on a run with the Rolling Reels to bring free spins into play. You could get up to 20 free spins complete with all payouts boosted by 10x. Landing 8 Rolling Reel wins in a row triggers the WowPot Major jackpot prize. Discover more in our in-depth African Legends WowPot review. This trip to the African plains is very easy on the senses. Microgaming and Slingshot Studios have created a fine-looking slot. With a safari theme, the reels are set against a backdrop of a lush river valley. The reels are made up of stone blocks. It all has a rather prehistoric feel.

There’s a catchy backing track playing while you spin. It’s rhythmical, drum heavy and works well.  Overall, no complaints about the sound or visuals.

On the reels you’ll find heart, diamond, club and spade symbols which are carved onto the stone blocks. They’re joined by higher value carved animal symbols. They include hippos, elephants and rhinos. The most lucrative symbol is the lion. Land 5 of these on adjoining reels for an award of 6 x your total bet.

Helping to create the winners is the golden totem mask which is the wild. This can appear on all 5 reels and substitute for all symbols. Land 3, 4 or 5 wilds in combination and you’ll scoop an award of 1, 2 or 10 x your total bet.

Like most slots in the Microgaming catalogue, you can join this safari on all devices including tablet and mobile. The simple gameplay is well-suited to mobile play. The super sharp visuals and catchy soundtrack are just fine too. The African Legends WowPot mobile slot is a playable one.

The African Legends WowPot jackpot slot is played with 5 reels, 3 rows and 243 ways to win. Winners are formed by landing 3 or more matching symbols on adjacent reels, starting from the leftmost reel.

Stakes in this safari adventure start at 25p per spin, rising to a maximum of £50 per spin. To adjust, click on the 3 lines above the spin button and adjust accordingly. Autoplay is available if required. You can run up to 100 autospins complete with win and loss stop limits. There’s also a turbo spin mode if you wish. The process isn’t the most intuitive. You have to adjust everything via the settings rather than a quick click on the game page.

This isn’t a particularly volatile slot. The volatility is in the medium range. The African Legends WowPot RTP rate is 94.92% which is a little skinny but not a total shocker given the progressive jackpot prizes it offers. The hit rate here is 37%. The max win is 1,200 x bet per spin without the progressive jackpot.

There isn’t a massive amount of variety on offer from the features. There’s no shortage of action though thanks to the Rolling Reels which can in turn deliver free spins, multipliers and of course the progressive jackpot.

Each time a winner is formed you’ll trigger the Rolling Reels feature. The winning symbols from the triggering spin are removed from the reels and new symbols drop in and replace them. A new payout consideration is then made.

If this results in a new winner, the process is repeated. The Reel Rolls continue as long as there’s a new winner on display. The Rolling Reels feature has been used in Microgaming’s most popular slots like Thunderstruck II and Immortal Romance amongst others.

In the base game, you can benefit from the Wild Blast feature. This extra can trigger randomly on any base game spin.

Up to 5 wilds are added to the reels and a payout calculation is made. If you create a winner here, the Rolling Reels feature follows. If you manage to land 4 or more Rolling Reels wins in succession, you’ll activate the Free Spins feature. The more wins in a row, the better the potential rewards. Here’s what’s on offer:

African Legends WowPot offers the chance to win 1 of 4 progressive jackpot prizes. You can see the size of the Mini, Minor, Major and WowPot jackpots in the meters to the side of the reels.

Rolling Reel wins are also the key to unlocking the WowPot Jackpot feature. The big prize is awarded by landing 8 Rolling Reel wins in a row. You can land the jackpot while playing at any bet level. Your chances improve the higher you play though.

The African Legends WowPot slot offers a fresh take on the classic safari theme. The stone-age style design is very nicely done. The features stack up well too. The range of bonus features isn’t massive but the Rolling Reels keep the pace high.

It’s not massively innovative and Microgaming has missed a trick here. The aforementioned Book of Atem WowPot slot has 4 progressive jackpots including the £2 million+ WowPot jackpot. Oddly, African legends WowPot only have the Major jackpot which begins at £50k.

What is the African Legends WowPot RTP + max payout?

What are Rolling Reels?

The Rolling Reels feature removes winning symbols with new ones dropping down to replace them. If a new winner is formed, the process is repeated.

Is there an African Legends WowPot free spins feature?

To activate the Free Spins feature, you’ll need to land 4 or more consecutive wins. Depending on the number of wins, you can look forward to between 12 and 20 free spins. Boosting your chances are multipliers of between 5x and 10x.

The African Legends WowPot slot offers you the chance to win the WowPot Major jackpot which is seeded at £50,000. It’s triggered by landing 8 Rolling Reel wins in a row.