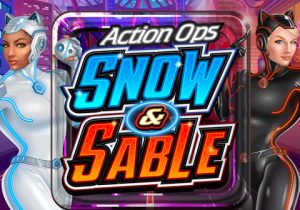 Crime fighters of the future are the stars of Action Ops Snow and Sable, a high variance video slot from Microgaming. Played using a 5 reel, 10 payline game engine, it comes with 2 wild symbols as well as a bonus round that offers unlimited free spins where reels 1 and 5 are wild throughout. Play on your PC, tablet or mobile from between 10p and £100 per spin.

There’s a crisp, shiny look to the design here. This isn’t a grimy, dystopian, Blade Runner-style world. With city skyscrapers in the background, you’ll see lower value royal values alongside smart watches, glasses, a ladybird-style droid and a car that Bruce Wayne wouldn’t look out of place driving. The car is the best paying standard symbol, awarding 25 times your bet if you land 5 on a payline.

Both detective Snow and Sable are wild. Land 3, 4 or 5 of 1 of them for a payout of 8, 50 or 100 times your bet. If you land a combination of both, the rewards are 3, 25 or 50 times your bet. Both the wilds spin in fully stacked formation and can hit on all 5 reels. This is known as the Stacked Wilds feature.

The main bonus round, the Free Spins feature, is triggered by landing 3, 4 or 5 scatters on the same spin. As well as a payout of 2, 10 or 100 times your total bet, you’ll also be awarded 10, 15 or 20 free spins. Throughout the free spins, both reels 1 and 5 are wild. Each reel alternates between the Snow and Sable wild. Hope to see plenty of scatters too as they deliver extra free spins. Landing 2, 3, 4 or 5 add another 5, 10, 15 or 20 free spins to your tally. There are no limits to the number of retriggers which means unlimited free spins potentially!

Action Ops Snow and Sable might have a futuristic look but the gameplay is actually pretty simple. The best action comes in the Free Spins feature where the stacked wilds can combine to spectacular effect. Be warned though. This is an extremely volatile game so you can expect some lengthy down spells punctuated by occasional success.

Snow and Sable won’t be as memorable as Starsky and Hutch, Morse and Lewis or even Rosemary and Thyme. This crime fighting duo can serve up some explosive action though. If you like high variance video slots, then it’s certainly worth a look. I also suggest you take a look at Playtech’s RoboCop or IGT’s Keystone Kops which have a crime/police feel to them.