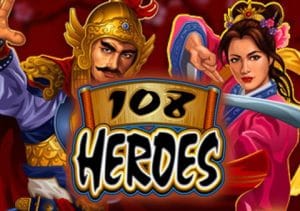 WHERE TO PLAY 108 Heroes SLOT

Based on a 14th century Chinese folk tale, 108 Heroes is a 5 reel, 15 payline video slot from Microgaming. The action centres on a heroic band of outlaws who are battling an evil king. Highlights include a pick me round and a free spins feature where all payouts are trebled. Join the warriors from between 15p and £75 per spin.

The visuals in 108 heroes are very nicely done – the lower value Q, K and A symbols are joined by 5 of the 108 Heroes. They brandish an assortment of swords, axes, shields and armour. The best of the Heroes is the man in the blue hat and the warrior in golden armour, both of whom offer payouts of up to 500 coins per payline.

King’s Treasure Bonus Game feature – this pick me round is triggered by landing 3 or more of the treasure chest symbol on the same spin. You’ll then be given the pick of 12 treasure chests. Pick 3, 4 or 5 of them (depending on how many chests triggered the round) to reveal instant win cash prizes. The more picks you have, the bigger the guaranteed win.

Free Spins feature – landing 3 or more of the Liang Mountain scatter symbol triggers the second feature. Here you can look forward to 10 free spins. All payouts during this round are boosted by a 3x multiplier and are trebled. Re-triggers are possible here too. You can also land the King’s Treasure Bonus game from within the free spins feature.

108 Heroes has an epic scale as far as design and theme are concerned. That’s not quite the case as far as volatility is concerned though. This is a medium variance game with a possible 1,600 times your stake to be won on each free spin. In the base game, you can win up to 533 times your stake (basically the 3x multiplier is applied in the feature).

The comic book-style visuals work well here and there’s a sweeping backing track to accompany your spins. A thumbs up for the design then. There’s a thumbs up too for the features – they’re nothing you won’t have seen many times before but offer plenty of action.

The outlaws in 108 Heroes robbed from the rich to give to the poor – with a fair wind behind you in the free spins round, you could hope to do the same. If you like the theme, I recommend Quickspin’s Wins of Fortune.