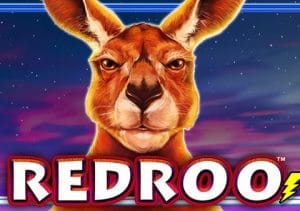 WHERE TO PLAY Redroo SLOT

Finding treasure among the dust of the Aussie outback is the aim in Redroo, a 5 reel, 1,024 ways to win video slot from Lightning Box Games. The highlight of this virtual trip down under is the bonus feature where you can win 8, 15 or 20 free spins, initially complete with wild multipliers that can boost payouts by up to 27x. Stakes range from between 20p and £1,000 per spin.

The arid Australian interior forms the backdrop to the reels in Redroo – those reels include a pair of pink cockatoos, a dog chewing a bone as well as male and female surfers and a kangaroo. Joining the standard symbol is Ayers Rock (Uluru) which is the game’s wild. It substitutes for all other symbols.

Red Rood comes with a Free Games feature but it’s a good one – to trigger it, you’ll need to land 3, 4 or 5 of the Australia map symbol anywhere on the reels on the same spin. You can then look forward to an initial haul of 8, 15 or 20 free spins. These are played out on a new set of reels set against a beachside backdrop rather than the barren outback. Keep a special eye out here for the wild which can boost payouts with a 2x or 3x multiplier whenever it lands.

Expect to see plenty of re-triggers here too – you’ll only need to find 2 scatters and 5 free spins are added to your total. Extra scatters are added to reel 5, further boosting your chances of landing more free spins.

The base game action isn’t the most exciting you’ll come across. The action really perks up during the Free Games feature though thanks to the multiplier wilds and the regular re-triggers.

The variance here is in the medium to high range – expect some spells as dry as the Aussie desert. You can win big on a single spin thanks to the combining multipliers though – up to 33,210 times your stake (with a 27x multiplier)!

Redroo is a pretty simple game, both in terms of design and gameplay. The feature round is a good one though and makes this Aussie jaunt worth a look. Get lucky with those wild multipliers and this kangaroo could leave you jumping with joy. If you like big multipliers, NextGen Gaming’s 300 Shields offers a potential 300x multiplier in the feature.