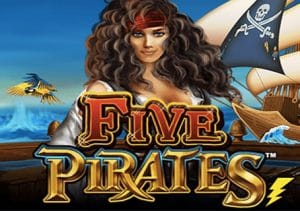 WHERE TO PLAY Five Pirates SLOT

Rip-roaring, seafaring adventure is on offer in Five Pirates, a 5 reel, 1,024 ways to win video slot from Lightning Box Games. Each of the 5 pirates from the title has their own bonus feature which offers a variety of free spin and multiplier combinations. Set sail from 40p to £50 per spin.

Visually, Five Pirates feels a little old school as the symbols look like they’ve come from a classic cartoon or comic. You’ll see cannons, parrots, maps and treasure chests spinning around the reels alongside the usual A to 10 playing cards.

Best of the standard symbols is the gold coin – land 2, 3, 4 or 5 of these in combination and you’ll pocket 50, 250, 350 or 500 coins. Helping you land those winners is the bearded pirate who is the game’s wild – he hits on reels 2 and 4 only and substitutes for everything bar the bonus scatter.

The female pirate is that bonus scatter – if you land 2, 3 or 4 of them on successive reels, you’ll trigger the Hold N Spin feature where you’ll get up to 3 re-spins with the triggering scatters locked in place. Land another scatter and it too is locked and the re-spins are reset to 3. The goal is the try and land a scatter on all 5 reels and in the process, trigger the Pirate Barrel Bonus feature.

Once you do trigger the feature, first choose 1 of the 5 pirates who will give you the following:

Once you’ve chosen your pirate, you need to pick from the barrels which award free spins and multiplier amounts. Every successful pick will reward you with more free spins, an increased multiplier or a cash prize. If you land on the red X, the feature begins with what you’ve got. The aim is to reach the top to get the maximum amount of free spins and the highest multiplier.

The multipliers can certainly deliver plenty of treasure. The bonus feature itself is pretty hard to come by though. These waters can be tricky for the bankroll and we’d put the variance on the high side.

It’s not the most visually appealing video slot you’ll see but the design has a certain retro charm. The feature round is a good one though, providing you can eventually land it. Get on a roll with a big multiplier and doubloons aplenty are on offer from the Five Pirates. If you like the theme, Novomatic’s Red Lady and NetEnt’s Ghost Pirates are worth walking the plank for.