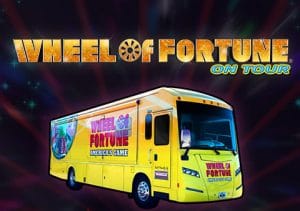 Wheel of Fortune On Tour: Demo

WHERE TO PLAY Wheel of Fortune On Tour SLOT

1 of the TV’s most popular game shows takes to the road in Wheel of Fortune on Tour – created by US giant IGT, it’s a 5 reel, 30 payline video slot that comes with plenty of extras. Bonus features include payback boosts, free spins and multiplier prizes. Look out too for the Wheelmobile Wild feature that can add multiple wilds to the reels. There’s also a Spin to Win feature as well as a special pick me bonus based on the famous Wheel of Fortune board.

Visually, Wheel of Fortune on Tour is a glitzy as the source TV show – all the imagery relates to a road trip so keep an eye out for maps, road signs, keys and a some of the country’s most famous tourist attractions such as Mount Rushmore, Hollywood and the White House. The famous Wheel of Fortune is the game’s wild, replacing all other symbols bar the scatter.

Of course to make a road trip you’ll need plenty of fuel – this comes each time you land a bonus symbol (the tour bus) but it doesn’t trigger a bonus feature. The more fuel you collect, the more bonus extras are unlocked during the road trip. The fuel in your tank increases by 1 – keep track on the meter at the side of the reels. For every 10 fuels you collect, you’ll receive 1 can. Activating the bonus also awards 1 full can.

Land the tour bus scatter on the odd numbered reels on the same spin and you’ll trigger the On Tour feature – how far you progress along the road map depends on how much fuel you’ve managed to accumulate. You start your bonus journey by spinning the Wheel of Fortune to reveal a coin prize. More wedges are added the more times you trigger the feature and more fuel you collect. These wedges offer extra features.

They include 3 free spins – before the spins play out, 1 symbol will be chosen at random. Whenever these symbols hits on the 1st spin, they will turn into wilds. Another symbol is selected on the 2nd spin. Just like spin 1, these symbols will turn wild too. The same procedure follows with a 3rd symbol on the 3rd spin. This trio of added wild symbols can deliver some spectacular results.

As we mentioned above, the further along the route you make it, the better the bonus extras on offer – make it past the 13-mile mark and you’ll receive the Expanded to Award. This added extra triples your chances of winning the top prize when you spin the bonus wheel.

Choose from the famous Wheel of Fortune Letter Board after 25 miles to reveal a coin prize of between 50 and 500, an extra pick and a multiplier boost. You can get up to 7 picks and a 5x multiplier here. After 45 miles, the Multiplier Wedge is added to the wheel, giving you another spin, this time with a multiplier boost of between 2x and 5x.

The Spin to Win Bonus feature is added after 80 miles – first pick a letter which will be the top award, offering prizes of between 1,500 and 20,000 coins, then spin the wheel. If you don’t like what you see, you can (3-2-1 style) reject a prize if you wish and spin again. A minimum value 50-coin segment will be added to the wheel though. Land on that 50 and the feature ends and that’s all you’ll win. Make it all the way to your destination after 150 miles and you will be awarded a random mystery feature.

And if all those extras aren’t enough, there’s 1 more extra to consider, the Wheelmobile Wilds feature. These extras arrive at random following a spin where the bonus symbol doesn’t land on reel 1. Anywhere between 1 and 4 symbols will turn wild followed by a new payout consideration, where hopefully the new added wilds will work some magic.

Wheel of Fortune On Tour offers plenty of variety – if you want a game where you can just sit back and hit autoplay then this probably isn’t one for you. Yes, it’s a little complicated so it may take some time to get accustomed to the unusual fuel tank filling set up. It’s worth persevering with though as there’s much on offer here. The previous Wheel of Fortune slots have already proved popular. If you enjoyed them, the chances are you’ll enjoy this slice of gameshow action too.