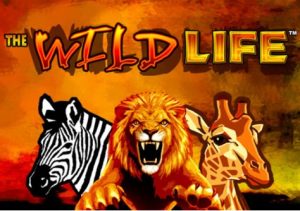 WHERE TO PLAY The Wild Life SLOT

Go on a hunt for a big game jackpot action in The Wild Life, a 5 reel, 10 payline video slot from IGT. This safari-themed game comes with expanding base game wilds as well as a feature round that awards free spins with frozen stacked wilds. Start your wild adventure from 10p to £2,000 per spin on all devices.

The sun-kissed African savanna is the setting for The Wild Life – the safari-theme is maintained on the reels which include lower value playing cards which are made up of animals prints, alongside 5 wild animals. In ascending order of value, look out for cartoon zebras, giraffes, rhinos, elephants and lions. The latter are the most rewarding, offering 2,500 coins if you land a 5-in-a-row combination.

The standard symbols are joined by a wild, the roaring lion, which can land on reels 2, 3 and 4 only. When it hits and goes on to form part of a winning payline, the wild will expand and fills the whole of the reel. This means you can get 3 fully wild reels on each spin in theory.

The Wild Life also comes with a Free Spins Bonus feature which is triggered by landing 3 or more of the Africa symbol which is the scatter. 3, 4 or 5 of these anywhere on the reels and you’ll receive 10, 15 or 20 free spins. Just like the base game, any wilds that hit on the middle 3 reels will expand.

During the feature, the expanded wilds will remain locked in place for any free spins you have left! You can add another 2to your total of free spins every time a scatter lands during the feature too. The key to winning big is to get the 3 locked wild reels early on.

The Wild Life isn’t the most spectacular video slot you’ll see either in terms of design or features – it’s all more than serviceable though. The cartoon visuals are neatly done and the drum-heavy backing track conjures up a feel of Africa.

The features aren’t particularly new but they offer plenty of action. The base game ticks over but the real potential thrills comes via the Free Spins Bonus feature. Land multiple stacked wilds early in your free spins and come mighty payouts are possible.

IGT has kept things simple here and it works rather well – with its solid design and potentially big-hitting features, The Wild Life is a safari trek well worth undertaking. It is highly volatile so you need to tread carefully – just a word of warning. I also suggest you try Black Knight II by WMS Gaming which has a very similar bonus feature.