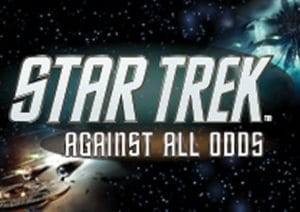 Star Trek Against All Odds: Demo

WHERE TO PLAY Star Trek Against All Odds SLOT

Star Trek Against All Odds is the 2nd Star Trek slot to be produced by IGT. The game is based on the Enterprise following the Narada in a desperate mission to stop Narada destroying Earth. The game has 5 reels and 720 ways to win whilst only using 60 coins per spin. You can play from 60p a spin to £300 a spin.

The Star Trek 2 slot uses the MultiWay Xtra feature where they are 720 ways to win on every spin. Basically, you can win both left to right and right to left and the reels are set in a futuristic hexagonal reels format. MultiWay Xtra awards pay out on matching symbols in any position in adjacent columns. If you have more than 1 matching symbol in the same column, the award is multiplied. The same technology is used in Siberian Storm and Fire Opals.

You have the Energizing Wilds feature which is triggered randomly after any spin (except when a Scatter is present). You will then see the Transporter Cursor appear and randomly turn between 2 and 5 reel symbols wild on the 3 central reels. This can lead to huge wins.

Then there’s the Enterprise Defender Bonus feature which you activate the feature by getting 5 Bonus symbols anywhere across the reels. This is an arcade-style bonus where you defend the Enterprise against incoming Romulan missiles for 45 seconds. You need to use the cursor to aim the Enterprise weapon which shoots automatically.

This is important as a random wheel is spun for your achieved rank. There are 9 wheels in total with 3 wheels per rank. The higher your rank, the higher the rewards on the wheels. If you are a Lieutenant, you can win up to 6,5000 times your stake, up to 15,000 times your stake for a Commander and up to a whopping 22,500 times your stake if you’re a Captain. This bonus feature may sound a little complicated so watch the video below to give you an idea of how it works.

Star Trek Against All Odds is a highly exciting game which has a high hit frequency when it comes to bonus features. The Energizing Wilds feature where up to 5 symbols turn wild is particularly good and the sound effects, graphics and animations are simply brilliant. I also quite like the shooter style Enterprise Defender Bonus feature where your skill can earn you up to 22,500 times your stake.

However, there is no free spins feature which is a little disappointing – this is where the first Star Trek slot has an advantage. Overall, it’s a good slot game where the innovative arcade-style feature is sure to keep you coming back for more. If you like Star Trek, you should also try Star Trek Red Alert by WMS Gaming which I think is better than the IGT ones.