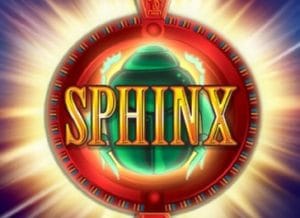 WHERE TO PLAY Sphinx SLOT

Unlock the mysteries of ancient Egypt and try and land a jackpot as you do in the Sphinx slot, a 5 reel, 9 payline game from IGT. This virtual trip to the land of the Pharaohs is a rather understated one, both in terms of design and gameplay. The only feature here is a pick me round. If you discover the Pharaoh’s burial statue you could unearth a payout of some 277 x bet. With an RTP of 97.01%, find out more about this treasure-hunting desert adventure in our detailed Sphinx review.

There’s nothing complicated about the Sphinx slot. The features are very rudimentary. The only bonus round is a pick and click bonus. Let’s see what riches the Sphinx can offer.

There’s only one feature in Sphinx and it’s a very simple one. To trigger the Sphinx Bonus feature, you’ll need to land 3 or more of the bonus scatter symbol (the gold coin) on a payline on the same spin.

You’ll then head deep down into the Burial Chamber for a classic pick me round. You’ll receive 1 pick for each payline that included 3 scatters on the triggering spin. The maximum number of picks you can have is 5.

IGT has kept things very straightforward with the Sphinx slot. The action plays out on a 5 reel, 3 row machine that offers 9 paylines. Land 3 or more matching symbols or wilds in a payline, starting from reel 1 to create a winner.

Stakes start at 9p per spin, rising to a maximum of £270 per spin for players who have a Sphinx-sized bankroll. Autoplay is available if required. You can set between 10 and 50 automatic spins.

The RTP here is an impressive 97.01%. Anything that gets above the 97% figure is a high return to player rate. Don’t expect much in the way of volatility in Sphinx. The variance here is very low. That makes it a good choice if you’re a casual player looking to get plenty of play from a modest investment. It’s probably a little too low for serious jackpot chasers though.

However, the max win is 10,000 times your total bet. You can win this amount if you manage to fill all symbol positions with wild symbols. Simplicity has been the watchword throughout this review of the Sphinx slot and that applies to the design as well as the gameplay. Many slots where Egyptian pharaohs take centre stage are very opulent and dripping in gold. Sphinx is a much more understated affair.

The reels are set against a backdrop of hieroglyph-covered walls. Those reels are plain white with the only hint of extravagance a tiny gold edging. On those reels you’ll find pyramids, fans, stones with etchings and rather bizarrely, a bar symbol which really isn’t in keeping with the theme. More rewarding are the palm trees, Anubis and cane symbols.

There’s a minimalist feel to the imagery which works pretty well. There’s just a hint of the ancient world about the soundtrack. The design here isn’t spectacular but it’s certainly a little unusual for a slot with this theme.

Sphinx is available to play on mobile and tablet devices as well as the more usual desktop and laptop computers. The unfussy visuals work very well on the smaller screen and are very neat and clear. The straightforward gameplay is fine too. No complaints here.

We were rather taken with the unusual visuals in the Sphinx slot game. We were less enamoured with the gameplay which was fine as far as it goes. It just doesn’t go very far. With just the click and pick bonus available, this really isn’t a slot for you if you’re looking for much in the way of variety.

That said, you can expect to open up the Burial Chamber fairly regularly but it’s not hugely exciting. In fact, that’s how we’d sum up Sphinx. The RTP is good and the design is rather nice. The max payout of 10,000 x bet per spin is also appealing. If you want ancient Egyptian adventure, there are many other popular slots which offer more in the way of bonus features and visuals. You should begin with the Rich Wilde and the Book of Dead slot by Play ‘n GO. Another option is IGT’s  very own Pyramidion which can offer even bigger wins.

❓ Is there a Sphinx mobile slot?

Yes, there’s a Sphinx slot mobile version. It comes with the same rather classy, minimalist design and simple features as the desktop version. You can also play Sphinx on tablets as well as other devices that use iOS, Android or Windows.

🥇 What is the Sphinx slot RTP?

The main reason to play Sphinx is its high return to player rate. Anything over 97% puts it into the high category and at 97.01%, Sphinx just about squeaks in. On average, for every £100 wagered, £97.01 is returned in prize money.

🎰 What is the Sphinx slot max win?

The biggest win in the Sphinx slot game comes from the wild symbol. Filling the screen with Pharaoh’s head wild symbol will result in a 10,000 times total bet payout.