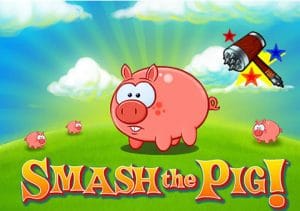 WHERE TO PLAY Smash the Pig SLOT

There are few more satisfying feelings than opening up a piggy bank and discovering it’s packed full of coins. That’s what you’ll be hoping to do in Smash the Pig, a 5 reel, 20 payline video slot from IGT. Helping you achieve that is a win both ways game engine and a pair of pick me rounds. Play, on all devices, from between 20p and £200 per spin.

Smash the Pig won’t be winning any awards as far as design goes – the cartoon visuals are a match for the theme though and it works well enough. Expect the occasional oink from the backing track too.

Joining the lower value J, Q, K and A symbols are a fairground hammer, a coin featuring the head of a piggy president and a pile of money. The Smash the Pig logo is the top symbol. Land 3, 4 or 5 of these on a payline and you’ll pocket a very tasty haul of 7.5, 50 or 500 times your total stake. Those winning lines can come from left to right and right to left as long as the winning combo starts on reel 1 or 5. There are two pick’em features on offer in Smash the Pig:

Pig Smashing Bonus feature – land 3, 4 or 5 Bonus symbols (or enter via the Pick a Pig Bonus feature) to trigger this round. You’ll see a luck meter to the side of the reels. The more bonus symbols that activated the round, the more luck you’ll get.

You’ll then be given the pick of 8 pigs – choose 1 to reveal a prize of between 1 and 20 times your stake. The level of the luck meter lowers as each pig is smashed. If you smash 5 pigs and still have luck in the meter, the 3 remaining pigs will scurry off. A full selection of 8 then return to the screen along with a boosted luck meter. Keep on picking until you run out of juice.

Smash the Pig is a simple game, both in the way it looks and it plays. The Pick a Pig Bonus feature lands more regularly of the 2 but the Pig Smashing Bonus feature offers better winning chances. We found both of them quite hard to trigger though.

Smash the Pig is solid enough, if a little dull at times. The key to a decent win is landing the Pig Smashing Bonus feature. Get lucky there and these little pigs can indeed be little smashers. Saying that, if you want volatile pigs, try NetEnt’s Piggy Riches which remains 1 of the most popular online video slots to date.