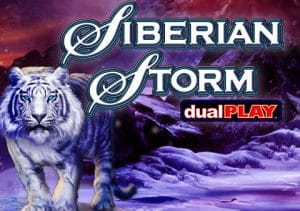 The frozen wastelands of Russia are the setting for Siberian Storm Dual Play, an unusual 5 reel video slot from IGT that offers players the choice of a 1,440 or 2,880 ways to win game engine. You’ll also find stacked wilds that can land 10-high as well as a free spins feature with up to 480 free spins up for grabs. Play, on all devices, from between 75p and £375 per spin for 1,440 paylines or between £1.50 and £750 per spin for 2,880 paylines.

This sequel to the original Siberian Storm video slot is very similar as far as design goes – set against a snowy backdrop with the white tiger overseeing proceedings, you’ll see a selection of gem-encrusted fossils and artefacts spinning around the reels. They’re joined by a pair of tigers, a tiger’s eye and a wild.

Where this game is very different from the maiden Siberian Storm is the game engine – there are 2 reel sets on display, linked by a middle reel that is 10 symbols high. You’ll have the choice of playing with just the top machine active which offers 1,440 ways to win. Double your stake though and you’ll activate the bottom set and boost the number of ways to win up to a whopping 2,880.

The game is played using IGT’s Multiway Xtra game engine where winning combinations are made by landing matching symbols on adjacent reels.

The wild can land stacked on the middle 3 reels. Best of all it can land 10-high on reel 3 and work its magic on both the top and bottom reel sets on the same spin. In fact, all symbols, not just the wild, can fill the whole of this middle reel.

Siberian Storm Dual Play also comes with a Free Spins Bonus feature – to trigger it, you’ll need to land 5 of the Bonus symbol on successive reels on either the top or the bottom set on the same spin. You’ll then receive 8 free spins. A further 8 free spins are added to your total for each subsequent 5-symbol combination giving you up to 160 free spins initially.

The free spins take place on a set of enhanced reels which offer even more wilds than the base game. Land the Bonus symbol in sufficient numbers and you’ll land a re-trigger with up to 480 free spins on offer.

Like the original, Siberian Storm Dual Play isn’t the most dazzling video slot as far as visuals are concerned. It has the look of a live casino gameand works well enough, especially when landing full stacks of the same symbol. The thunderous backing track is pretty good though and the action is punctuated by the occasional throaty roar from the tiger.

You’ll see plenty of action in Siberian Storm Dual Play courtesy if the Multiway Xtra game engine which offers ample winning opportunities. The top chances come via the Free Spins Bonus feature though where the extra wilds can have a big impact. Get lucky here and the Siberian tigers can cook up a storm.