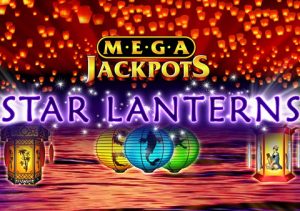 Floating off with a huge haul of coins is the goal in MegaJackpots Star Lanterns, a Chinese-themed progressive jackpot video slot from IGT. Available to play on desktop, mobile and tablet devices, it comes with a 5 reel, 20 payline, floating reels game engine where you can boost your payouts with multiplier that can reach 15x. Also on offer is are free spins as well as 2 ways to win a life-altering amount of loot. Play, on all devices, from between £20 and £600 per spin.

The design in MegaJackpots Star Lanterns is rather lovely – a purple lake and a sky filled with lanterns form the backdrop to the reels. Those reels are made up of 7 brightly coloured lanterns, ranging from simple paper shades with animal patterns to beautifully ornate objects. They can deliver decent payouts too with the most lucrative of them awarding up to 1,000 coins. There’s also a standard wild that substitutes for everything apart from the bonus, star and Mega Jackpots symbols.

MegaJackpots Star Lanterns is played using a Floating Reels feature – every time you land a winner, the successful symbols are removed and new symbols float into place and a new payout is made. These floats continue as long as there’s a new winning combination created.

The 3D star symbol has some magical properties when it lands on reels 1, 2 and 3 – 1 star on the reels on a winning spin will boost a payout with a randomly chosen multiplier of 2x, 3x or 5x. If more than 1 star lands on the same winning spin, the multipliers are added together, offering some potentially massive boost. This is known as the Star Multiplier feature.

MegaJackpots Star Lanterns also comes with a Free Spins Bonus feature- to trigger it (as well as getting a payout of double your stake), you’ll have to land 3 of the flower scatters. You’ll then be shown 3 lanterns – pick to reveal the number of free spins you’ve been given. This will be a minimum of 4 but can reach up to 14. The star multipliers will be available during the feature too meaning you can benefit from 5x multipliers on each free spin.

So what of the massive jackpot prizes? There are potentially 2 ways to land the big one. Hit 4 of the 3D star symbol on a spin or consecutive run of floats in either the base game or bonus feature and you’ll trigger the progressive. A second shot is offered following any spin courtesy of the Second Chance draw which can also trigger a storm of coins.

MegaJackpots Star Lanterns is an entertaining video slot. The visuals, complete with a tranquil and rather lovely backing track are very nicely done. The base game action bobs along nicely courtesy of the floating reels game engine. Add the multipliers and free spins and there’s plenty to get stuck into here. Chuck the progressive jackpot into the mix and this virtual trip to China becomes a very attractive option.