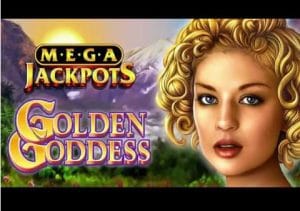 A trip to ancient Greece could lead to life-changing rewards in MegaJackpots Golden Goddess. This progressive jackpot video slot from IGT is played using a 5 reel, 40 payline game engine and comes with transforming super stacked symbols, free spins and of course a chance to land a bumper progressive payout. Play on your desktop, tablet or mobile device from between 40p and £1,200 per spin.

IGT has kept things pretty simple as far as design goes. Set against a hillside backdrop, the reels include lower value playing cards as well as a dove, a horse, a mystery man and the Golden Goddess of the title.

On any spin, stacks of symbols can transform into the same matching symbol to create some potentially impressive winning clusters. All symbols, including the Golden Goddess logo wild and the Mega Jackpots symbol can transform. In fact, the only one that can’t is the red rose scatter. This is the Super Stacks feature. The Golden Goddess wild is by far the best paying symbol, offering awards of 1,000 coins if you land 5 on the same payline.

Fill the middle 3 reels full stacks of the red rose scatter to trigger the Free Spins Bonus feature and with it 7 free spins. Before the feature begins, 1 of the dove, horse, man or Goddess symbols will be chosen at random to be the special transforming symbol. All symbol positions in these stacks can transform into the MegaJackpots symbol.

The highlight of this game is of course the potential MegaJackpot. Look out for the Golden Goddess wild which can transform into the MegaJackpots symbol in the base game. As we’ve already mentioned, the special transforming symbol does the same in the Free Spins Bonus feature.

The aim is to fill all 15 symbol positions with matching MegaJackpots symbols. Manage that and you’ll trigger the biggie. There’s also a Second Chance element that gives another bite of the jackpot cherry.

Even though the progressive jackpots offer potentially enormous rewards, the game itself is actually very low variance. With such low volatility, you’ll get plenty of play for your investment and shouldn’t suffer too many lengthy losing spells. If you’re a casual slots player or nursing a limited bankroll, it’s a decent place to start.

If you’re looking for a low variance video slot that offers a chance of a life altering win then MegaJackpots Golden Goddess offers just that – I would rather play Playtech’s Age of the Gods video slot which offers life-changing jackpots and high variance gameplay.