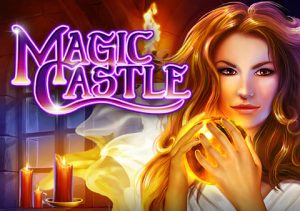 WHERE TO PLAY Magic Castle SLOT

Mysterious multipliers and transforming wilds are just some of the goodies on offer if you take a trip to the Magic Castle. Powered by IGT, this well-designed, sorcery themed video slot is played using a 5 reel, 40 payline game engine and comes with a bonus feature that awards between up to 300 free spins with a 10x multiplier. Play from between 40p and £2,000 per spin on desktop, mobile and tablet devices.

The design in Magic Castle is impressive – set against a castle interior and flanked by flaming torches, the reels include an array of fantastical objects. They include goblets, red roses and dripping candles which pay up to 75 coins per payline. They’re joined by a pendant, jewellery box and book of spells which will get you 150 coins if you land 5 in combination.

There is also a black cat and a white wolf which offer awards of 300 or 400 coins respectively if you land a 5-in-a-row combination. The pair of animals possess some magical characteristics too, turning wild when they land on reel 5. That’s not all though as any other matching cat or wolf symbols will also turn wild for that spin. This is known as the Familiar Upgrade feature.

The mysterious, flame-haired woman known as Leonora is the main wild – she appears 2 symbols high and replaces all other symbols bar the bonus. She offers awards of 100, 200 or 1,000 coins. She can also strike up multiplier awards from her crystal ball whenever she forms part of a winning line. The more wilds on the screen, the bigger the multipliers on offer via the Crystal Ball Multiplier feature:

All free spins during the feature are boosted by wild multipliers. The figures are the same as the base game. Even if there are no wilds on show, all payouts will be boosted by between 2x and 10x. You can re-trigger more free spins too with a whopping 300 on offer. Furthermore, the Familiar Upgrade feature applies giving you 2 extra wilds.

There’s much to like about Magic Castle – it’s well designed, boasting high end visuals and a suitably sweeping, orchestral backing track. The gameplay impresses too. We didn’t see Leonora as often as we’d have wished but she did work plenty of multiplier magic when she did appear.

The Free Spins Bonus feature offers the best chance to land a biggie thanks to the multipliers that hit on every spin, regardless of whether you land any wilds or not. With the wilds, multipliers and free spins on offer, this Castle can certainly live up to its Magic name if fortune is with you. If you like castles, save the princess with Play ‘N Go’s Prissy Princess.