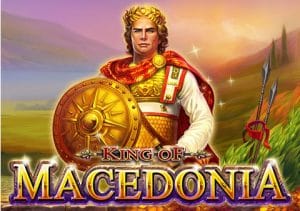 WHERE TO PLAY King of Macedonia SLOT

A mighty warrior from the ancient world is the star of King of Macedonia, a 5 reel, 40 payline video slot. Highlights of this IGT-powered game are multipliers that can boost payouts by up to 10x, gigantic wilds that fill up 2 reels and a bonus feature that awards 8 free spins with locked wild reels. Play on all devices from 80p and £1,600 per spin.

A hillside palace forms the backdrop to the reels here – on those reels you’ll see a selection of objects from the ancient world including scrolls, lutes, pots, vases, jewel boxes and horses. Most rewarding is the queen who awards 200 coins for a 5-in-a-row combination.

Helping to create those winning combinations is the King who is the game’s wild. Looking like he’s just stepped out of the salon rather than getting mucky at the front, the king can land as a gigantic wild on reels 2 and 3 and 4 and 5. The final symbol is the warrior’s shield which is the bonus – this can land on reel 1 only. When it does and no king wild lands elsewhere on the reels, any win will be boosted by a random multiplier of 2x, 3x, 5x or 10x.

Land the bonus symbol and a king wild on the same spin and you’ll trigger the King Free Spins Bonus feature. On offer here are 8 free spins. That doesn’t sound like a particularly generous allocation but the gigantic wild from the triggering spin will be locked in place throughout the free spins to give your winning chances a big boost.

IGT has created a very nicely designed video slot here. The visuals are neat and crisp and the orchestral score has a sweeping, epic quality. King of Macedonia is all about the gigantic wilds. Even landing partial stacks of them across reels 2 through 5 can deliver some fine action.

Egypt has been dominating the ancient-themed releases of late – King of Macedonia makes a welcome change as is certainly worth considering if you enjoy the classical genre. I suggest you try King of Atlantis, also by IGT, which is King of Macedonia’s prequel.