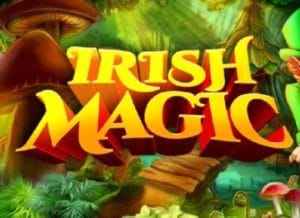 WHERE TO PLAY Irish Magic SLOT

A lucky leprechaun is our guide through a fantastical forest in the Irish Magic slot, a 5 reel, 10 payline game from IGT. Spicing up the base game are stacked wilds that can appear on all 5 reels. The highlight is the bonus round though. Once triggered, you’ll receive up to 20 free spins with a guaranteed jackpot prize. The more wilds that land during the free spins, the bigger the jackpot awarded. We’ve played countless slots with this popular theme. Find out how this one shapes up in our detailed Irish Magic review.

At first glance, the Irish Magic slot looks a pretty standard take on this classic theme. Look closer though and you’ll find some potentially interesting gameplay, especially in the bonus round. We’ll start with the base game though.

The base game action in Irish Magic is pretty ordinary. The main attraction are the stacked wilds. These pots of gold coins can appear on all 5 reels and turn them wild.

The Free Spins Bonus feature is activated by landing 3 of the green top hat scatter symbol on the same spin. After a payout equal to your total bet, you’ll then get a spin of the Bonus Reel. This determines whether you’ll receive an initial allocation of 10, 15 or 20 free spins. You can expect to see more stacked wilds in the bonus round than during the base game.

Joining the action in the free spins is a special 4-leaf clover symbol. Each time one of these appears during the feature, 1 more free spin is added to your total. It’s possible to land up to 100 free spins in this round.

The Free Spins Bonus feature also offers you a chance to land a special jackpot prize which comes on top of any standard wins you might accrue.

Each time you land a wild during the free spins, it’s collected and you’ll move up the jackpot ladder. The more wilds you manage to land, the bigger the potential jackpot prizes become.

It’s possible to increase the size of the jackpot with the horseshoes up to 10 times. This means you could increase the top jackpot up to 2,000 x your bet.

Irish Magic is played on a 5 reel machine with 3 rows. With just 10 paylines, a win is created when you get 3 or more identical symbols starting from reel 1.

Stake levels in Irish Magic range from between 10p and £200 per spin. Set you bet level by clicking on the green button below the main spin button. Above the spin button is the autoplay. This allows you to run up to 50 spins in succession. These stop automatically if you trigger the Free Spins Bonus feature.

Irish Magic isn’t a very volatile slot. The variance here is on the low side of medium. You can expect to see plenty of smaller wins. Considering this slot is called Irish Magic, it’s not completely drowning in Irish clichés. Yes, there’s plenty of green on display. You won’t see pints of Guinness spinning around the reels or hear cries of ‘top o’ the morning’. It’s slightly more understated than that.

You’ll usually find a stereotypical ‘diddly dee’ backing track in slots starring leprechauns. Again, Irish Magic slightly bucks the trend. The orchestral backing track is the sort of thing you might hear in a magical fantasy-themed slot rather than and Irish one.

In fact, you could say that about the overall design. Bar the odd symbol and the dancing leprechaun at the top of the screen, the sound and visuals aren’t massively Irish. They’re simple and colourful and do the job.

IGT has created an Irish Magic mobile version that has been optimised for mobile play. It’s available in iOS and Android devices and offers the same simple design and low variance gameplay as the desktop version.

Did Irish Magic live up to its name? Well, not really. It doesn’t feel particularly Irish. We didn’t find the gameplay that magical either. That said, the Free Spins Bonus feature can be well worth hitting thanks to the jackpot element. A couple of quick level ups can quickly get things moving.

The low variance won’t be to all tastes but if you want a slot that offers a hint, rather than a whacking great dollop of green, you’ll find that in Irish Magic. For more leprechaun action, Rainbow Ryan (by Yggdrasil Gaming) and Rainbow Riches Megaways (by Barcrest) offer more Irish clichés and bigger potential payouts.

Is there an Irish Magic mobile version?

Yes, you can play the Irish Magic slot in a specially designed mobile version. It’s available on tablet devices too and offers the same cheerful sound and visuals and relatively low variance gameplay.

What is the Irish Magic RTP?

The Irish Magic RTP is 96.02% which is pretty standard for an IGT slot. For every £100 you bet, you’ll win back £96.02 on average. As it’s a low to medium variance game, you’ll get plenty of frequent wins to keep you playing.

Is Irish Magic a jackpot slot?

No. You can’t win any progressive jackpots here. There are 5 potential jackpots on offer during the Free Spins Bonus feature which can deliver some pretty big rewards, especially if you see horseshoe symbols which level up the rewards.

Is there an Irish Magic free spins feature?

Yes. Land 3 top hat scatter symbols and you’ll get a spin of the Bonus Reel. You’ll then play 10, 15 or 20 free spins. There’s plenty of scope to add more free spins as well as landing a special jackpot prize which is determined by the number of wilds that hit during the feature.