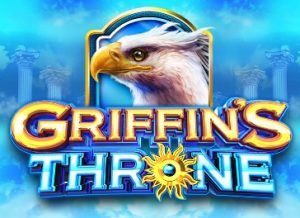 WHERE TO PLAY Griffin’s Throne SLOT

The legendary creature with the body of a lion and the head and wings of an eagle is the star of the Griffin’s Throne slot. Created by IGT, it’s a 5 reel, 30 payline game that comes with some unusual gameplay. Central to the action are  respins where wild and griffin symbols are held and a colossal column filled with wilds and multipliers appears. There’s also a Free Spins Bonus feature that awards up to 150 free spins on an expanded set of reels that offers 90 paylines rather than the usual 30 paylines. The multiplier respins can hit here too. Find out more in our detailed Griffin’s Throne review. There’s a suitably epic feel to the design in the Griffin’s Throne slot given the myth and legend theme. With swirling clouds and blue skies in the background, the reels are flanked by columns and watched over by a giant Griffin.

The visuals are nicely done and like many slots from IGT, have the look of a brick and mortar casino game. There’s a fast-paced orchestral backing track playing while you spin. It’s a good fit for the adventure theme and works well.

In the base game, the reels are down at the bottom of the screen and look a little squashed. The visuals come into their own when the multiplier pillar appears and especially on the expanded reels in the Free Spins Bonus feature.

You’ll see A to 9 royal symbols as well as a sword and scabbard, a shield, a vase and a warrior’s mask. The griffin is the most rewarding symbol, paying up to 1.66 x bet per payline. That’s not a huge number but you have to factor in the potential from the wild multipliers.

You can play Griffin’s Throne on desktop, tablet and mobile devices. The game works surprisingly well on mobile in fact. In portrait mode, the expanded reels look an absolute treat.

The Griffin’s Throne slot is played with 5 reels, 4 rows and 30 paylines to begin with. A win is simply created by landing identical symbols beginning from reel 1 from left to right on successive reels.

Bet levels in Griffin’s Throne start at a rather high 75p per spin. Stakes can get astronomically high here too with the maximum bet standing at a mind-boggling £2,250 per spin. This isn’t a slot for microstakes players. You can set between 10 and 50 autospins as required. Autoplay ends whenever you trigger a feature.

The Griffin’s Throne RTP is 96.05% which is about average. The action here is high variance. The maximum payout is 3,750 x bet per spin and this will likely land in the free spins as you play with 90 paylines (as opposed to 30 in the base game).

The range of extras isn’t massive in the Griffin’s Throne slot. They’re a little unusual though, especially the multiplier element. This can deliver boosts of up to 10x and can really get the cashier moving. The Multiplier feature triggers whenever you land a sun scatter symbol anywhere on the reels. Any Griffin or wild symbols are frozen in place. The reel or reels that contain a triggering sun symbol then morph into Golden Pillar that’s 12 symbols high.

This Golden Pillar is made up of standard wilds as well as multiplier wilds worth 2x, 3x, 5x, and 10x only. A respin then follows. After the respin, a number of symbol positions corresponding to the total number of Griffin, wild, 2x, 3x, 5x, and 10x symbols on the reels may transform into wild symbols. Land 3, 4 or 5 scatter symbols on the same spin and you’ll trigger the Free Spins Bonus feature. You’ll receive 10 free spins (plus a payout of 10 or 20 x your total bet if you triggered with 4 or 5 scatters).

The free spins play out on an expanded set of 12-symbol high reels that offer 90 rather than 30 paylines. The Multiplier feature is live during the free spins too. When it hits, between 6 and 13 positions can turn into wilds. Individual multipliers of up to 10x are again in play. Once again, they can combine to even bigger effect.

Re-triggers are possible too. Landing 2 palace scatter symbols on the same spin adds 3 more free spins to your total. Landing 3 or more will get you a full retrigger and another round of 10 free spins. There’s up to 150 free spins to be won in total.

We’d always recommend giving a slot a trial run in demo mode if you can. That’s definitely the case with the Griffin’s Throne slot. The Multiplier feature takes a little getting used to so try before you buy if you can.

When you’ve got accustomed to the slightly unusual gameplay, there’s a lot to like here. The sound and visuals are very good and the free spins and wild multipliers can deliver some very decent and very volatile action. This game particularly looks great on mobile devices.

The appetite for the ancient world shows no sign of slowing down. The Griffin’s Throne slot is a perfectly solid addition to the field. Another game with a similar theme is Playtech’s Age of the Gods: Glorious Griffin slot which also offers 4 randomly-triggered progressive jackpots.

What is the Griffin’s Throne RTP?

What is the Griffin’s Throne max payout?

The Griffin’s Throne slot game offers potential wins of 3,750 x bet on every free spin. To help you win big, you have multiplier wilds and 90 paylines in the Free Spins Bonus feature.

Is there a Griffin’s Throne free spins round?

Yes, trigger the Free Spins Bonus feature and you’ll receive 10 free spins. These are played on an expanded set of reels that are 12 symbols high that offer 90 paylines rather than the usual 30 . You can land the multiplier respins and win more free spins with up to 150 free spins in total.

Is there a Griffin’s Throne mobile slot?

Yes, IGT has created a Griffin’s Throne mobile slot. The sound and visuals in the small screen version work very well as it’s been produced in portrait mode. You can also play on desktop and tablet devices.