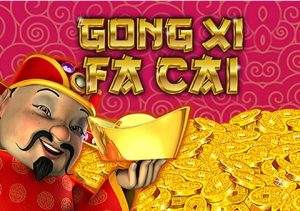 Gong Xi Fa Cai, or happy new year for us non-Mandarin speakers, is a 5 reel, 50 payline jackpot video slot from IGT. Boasting a strong Chinese theme, it comes with a free spins feature as well as multipliers that can boost your payouts by up to 5x. Join the celebrations, on all devices, from between 50p and £750 per spin.

Like many of IGT’s online offerings, Gong Xi Fa Cai started life in brick and mortar casinos – the visuals and gameplay have a strong feel of a live venue slot. Red and purple dominate the colour palette and the reels are backed by lanterns and watched over by a moustachioed man in traditional Chinese dress.

The reels maintain that traditional feel. Joining the A to 10 playing cards are a puppet dragon, fish, bird of prey and dragons. The latter is the top payer, offering 550 coins if you land a 5-of-a-kind combo. The wild can land anywhere and substitutes for everything apart from the scatter – it offers payouts of 25, 150 or 600 coins.

When first opening Gong Xi Fa Cai, you’ll be offered the choice of paying an extra 25 coins per spin which will unlock the Multiplier feature which offers you a series of multipliers. These are attached to the standard symbols on reel 1 only and can boost payouts by 2x, 3x or 5x.

Gong Xi Fa Cai also comes with a Free Spins feature – to trigger it, you’ll need to land the Chinese letter scatter on the odd numbered reels (1, 3 and 5) on the same spin. Starting with 8 free spins, the free spins take place on a new machine where all of the playing card symbols are removed.

The animal symbols get a golden makeover as well as an increase in their payout amounts. For example, the dragon offers a top award of 750 coins in the free spins compared to 550 in the base game. If you’ve paid the extra 25 coins, you’ll also have access to the reel 1 multipliers during the feature. 3 scatters on the same spin will trigger another round of free spins.

Massive jackpot payouts are also possible in Gong Xi Fa Cai – the jackpots can randomly hit after any spin. You’ll then be presented with a selection of money wallets – keep picking until you have found 3 of the same colour. Depending on the colour, you’ll then be in line to pocket the Mini, Minor, Major or the potentially massive Maxi Jackpot.

Gong Xi Fa Cai is a typical IGT video slot, combining shiny visuals, solid features and a shot at life-changing sums of cash via the progressive jackpot. This is a case of ‘if it ain’t broke, don’t fix it’. If you like the regular IGT combination, you’ll want to join in the new year festivities on offer here. If you like jackpot games, Playtech’s Jackpot Giant is very good.