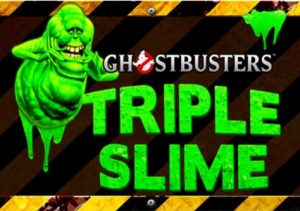 Supernatural sleuths Spengler, Stanz and Venkman get a second video slots outing in Ghostbusters Triple Slime. Based on the hit 1984 movie, this 5 reel, 720 ways to win game from IGT comes with top end sound and visuals and a pair of spin the wheel-style bonus features that award cash and multiplier prizes. Play on all devices from between 50p and £1,500 per spin.

The setting for Ghostbusters Triple Slime is a New York street – the reels are constructed in a 3x4x5x4x3 formation and include a range of Ghostbusting equipment such as ectoplasm detectors and ray guns as well as the Ghostbusters’ Hearse. The higher value symbols are the 3 parascientists, Spengler (Harold Ramis), Stanz (Dan Aykroyd) and Venkman (Bill Murray).

To form a winning combination, you have to land matching symbols on adjacent reels. Helping you manage that is the famous Ghostbusters logo which is the game’s wild, replacing all other symbols bar the bonus scatter.

That bonus scatter is Slimer, the translucent green ghost – land 3, 4 or 5 Slimers anywhere on the reels simultaneously and you’ll trigger the Slimer Scatter Bonus feature. Each scatter from the triggering spin will turn into a mini bonus wheel. These wheels will then spin, awarding a coin prize depending on where the pointers land. The total from all of the wheels are added together and that will be your prize – up to 75 times your total bet.

The Ghost Catcher scatter triggers the second feature – bonus wheels are once again at the centre of the action in the Triple Slime Bonus feature. Use the Muon Traps to first pick up to 7 ghosts. Each 1 collected will give you a pointer to use on 1 of the 3 big wheels. Once you’ve finished your ghostbusting, the wheels will spin and offer a selection of cash and multiplier awards with up to 5,000 coins and a 10x multiplier. These are totted together and sent to the cashier – there’s a cool 2,919 your total bet to be won!

You’ll notice that there aren’t any free spins on offer here – that’s a little disappointing of course. There are things to make up for that lack of freebies though. The design is top notch, both in terms of sound and visuals. The images are sharp and crisp and Ray Parker Jr’s classic ‘Theme from Ghostbusters’ bounces along in the background.

The 2 ‘spin the wheel’ features are decent enough too, especially the Triple Slime Bonus feature, where the multipliers can quickly get the coins flowing. The pace is pretty high in the base game too thanks to the 720 ways to win game engine.

This latest outing for the supernatural sleuths is another good one – yes, we’d have liked to have seen some free spins. The quality design and wheel bonuses are decent substitutes and make this movie adaptation one to watch. If you like video slots based on popular movies, Microgaming’s Jurassic Park is highly recommended.