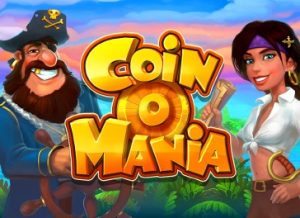 WHERE TO PLAY Coin-o-Mania SLOT

Set sail for some swashbuckling adventure on the high seas in the Coin-o-Mania slot. This 5 reel, 40 payline title has been created by US giant IGT and comes with the developer’s usual brash and bold design.  There are some decent extras on offer here too. Land coins to bring wilds into play which can in turn reveal multiplier which can send payouts rocketing by up to 21x.  Trigger the feature and you’ll play with up to 600 free spins. Those free spins offer extra opportunities to land treasure chests which can in turn deliver even more wild goodies. Find out more in our detailed Coin-o-Mania review.

The Coin-o-Mania video slot comes with 5 reels, 4 rows and 40 paylines. A win is created by seeing 3 or more identical symbols across any of the 40 paylines. Winning combos must start from the first reel and appear on consecutive reels.

The slot is available to play regardless of your bankroll. Bet levels start at 15p per spin if you’re nursing a small bankroll, rising to a maximum of £300 per spin for the extravagant high rollers.

This is a very volatile slot. The Coin-o-Mania volatility is in the low to medium range. You can expect regular, smaller wins here. It’s a solid pick for casual players looking to eke out a bankroll.

The pirate theme might be a very familiar one but there are a few things that make Coin-o-Mania rather different from the norm. That’s largely down to the wilds and how you land them. At first glance, the set up in Coin-o-Mania looks pretty standard. Below the reels are 5 porthole-style positions where gold coins can land. On any spin where you land coins in all 5 of these positions, you’ll trigger the Wilds Mania feature.

Coins in these portholes are placed on the reels as wilds. For example, if you have 3 coins in the porthole below reel 2, 3 wilds are then added to reel 2. These wilds can also come with multipliers attached which can send payouts rocketing by between 2x and 20x in the base game.

You can land 1 multiplier wild on each reel. If you’re lucky enough to land more than one multiplier wild, their values are combined. The payout calculation is made when all the wilds are in position.

The treasure chest symbol can appear on reel 3 only. Whenever one appears, it triggers the Chest feature. You’ll land at least 1 wild on all 5 reels when the Treasure Chest works its magic.

If a new wild symbol lands on a wild that’s already in play, it delivers a multiplier boost, increasing the number by 1x. The maximum potential multiplier here is 21x.

Land the bonus scatter symbol on reels 2, 3 and 4 on the same spin to activate the Free Spins Bonus feature. Your reward is 15 free spins. Boosting your winning chances during the free spins is the addition of extra treasure chest symbols on reel 3. That means potentially more Wild Mania and extra wild wins.

Landing 3 scatter symbols during the feature will add another 15 free spins to your tally. Multiple re-triggers are possible. The theoretical maximum number of free spins is 600. Bright, bold and brash design is a feature of many IGT slots and that’s the case with the Coin-o-Mania slot. The US developer cut its teeth creating brick and mortar casino slots and that colourful style is evident in many of their online releases.

Guarding the reels are a female pirate and the pirate skipper who sports a suitably magnificent beard. The imagery here is bright, colourful and light-hearted. You’ll hear a suitably toe-tapping jig playing while you spin too. It all works nicely enough.

All the symbols on the reels relate to the buccaneering theme. There’s no playing card filler here. You’ll see cutlasses, telescopes, anchor and cannon symbols as well as a cheeky parrot, a pirate ship and 2 members of the crew. The most lucrative symbol is the pirate captain who’ll get you an award of 3 x bet if you land 5 on a payline.

That doesn’t sound like much for a top-paying symbol. That doesn’t factor in the potential for the multipliers though which can quickly get things ticking over.

We’ve walked the virtual plank in hundreds of pirate-themed slots. There’s nothing revolutionary about Coin-o-Mania but the colourful design and the slightly unusual extras makes it playable enough.

The wilds are the key to success here, both in the base game and the Free Spins Bonus feature where up to 600 free spins can be won. For a simple pirate adventure, you could do worse than setting sail with the Coin-o-Mania crew though.

What is the Coin-o-Mania RTP?

The RTP for the Coin-o-Mania slot is bang on 96%. The waters in this pirate adventure aren’t especially choppy as the volatility is in the low to medium range making it a good pick for casual players.

What is the Coin-o-Mania max win?

The maximum payout in the Coin-o-Mania slot game is 1,147 x your total bet per spin. The likelihood of winning this will come from the multipliers in the various bonus features.

Are there Coin-o-Mania free spins?

Yes, to trigger the Free Spins Bonus feature you have to land 3 scatter symbols on the middle 3 reels. Beginning with 15 free spins, extra treasure chests are in play so expect extra wilds too. You can also retrigger for up to 600 free spins in total.

Is there a Coin-o-Mania mobile slot?

Yes, IGT has created versions of Coin-o-Mania that are fully optimised for play on desktop, tablet and mobile devices. You’ll find the same colourful design, catchy soundtrack and straightforward gameplay in all versions.